Digging for gold in Australia 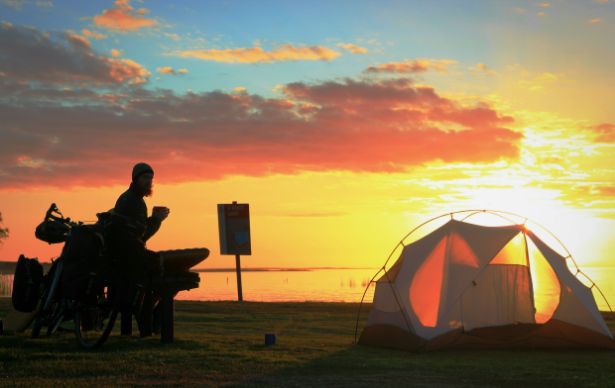 This morning, a man with an eye patch unrolled a map on our breakfast table and showed us where to dig for gold.

I kid you not.

We’d first spotted this chap – let’s call him One Eyed Bruce – rummaging through a bin a few yards away. We had spent the night at a bush camp site in rural South Australia, and he lived just up the road. He introduced us to his dog, Trixie Lightning, apparently the fastest dog we’d ever see. This surprised us – she was less greyhound, more barrel on cocktail sticks – but we chose not to question a man wearing a ripped leather jacket in the middle of nowhere when our only getaway vehicles are heavy bicycles.

Ol’ One Eye proceeded to show us his artwork, namely a huge painting of a gorilla which he was carting around in his pickup, presumably in the hope of flogging it to passing cycle tourists. He then got onto the good stuff: where the treasure is to be found. He pointed out the areas where he was going to head and dig for sapphires, and the creek awash with gold where he plans to buy a house. We have no idea why he trusted us with such valuable information, but safe to say we’re not changing our cycling plans in a hurry. 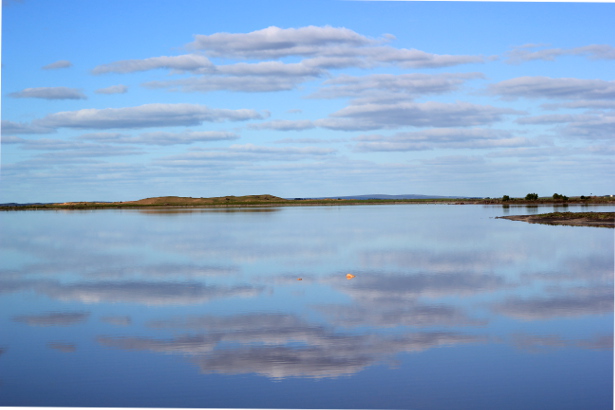 The history of Australia abounds with tales of hopefuls eager to make their fortune. It’s satisfying to see that this tradition is alive and well, even if the sanity of today’s prospectors may be questionable. With thousands of square miles of nothingness, there is an appealing sense that you might strike it lucky and make your fortune.

Rural Australia is also full of people like our mate Brucey. Enjoying the novelty of being in an English-speaking country, we embrace approaches from strangers at lunch and camp spots, and have concluded that this place has more than its fair share of eccentrics. Either that, or we just attract them. We spent one night camped outside a roadhouse on the Coorong, a long stretch of lonely road, where for some inexplicable reason the owner had chosen to hire two young blonde Swedish girls out of the hundred or so applicants for the post. They confirmed that they, too, have noticed the high numbers of oddballs. In a country this big and this empty, loneliness has to be an issue outside the major cities, and a high number of single middle aged men are left adrift amid the gum trees and sheep with few opportunities for interaction. This said, we’ve also been cycling through one of the more populated corners of the country – the true Outback must be another world entirely. 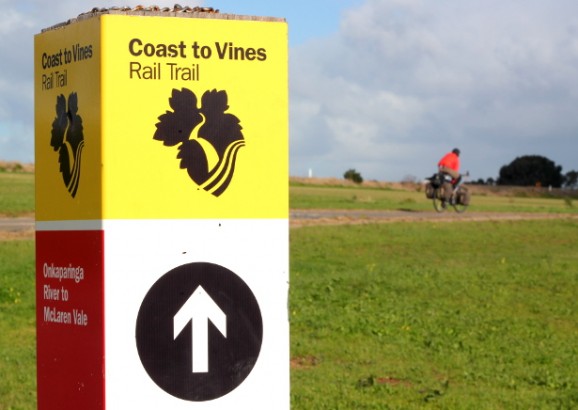 Lovely bike path out of Adelaide

We’re now halfway to Melbourne, in a little town called Mount Gambier. The first week out of Adelaide was a scenic jaunt through vineyards and cow fields, interrupted by the odd kangaroo or magpie attack (I don’t mean the kangaroos have attacked – at least, not yet). Only Australia, renowned for its abundance of Killer Animals, would have birds which swoop down on cyclists with such viciousness. We’ve camped among possums and pelicans; by lakes and beneath gum trees. Best of all, we’ve been enjoying the wide availability of cheese again, merrily working our way through entire blocks of cheddar. 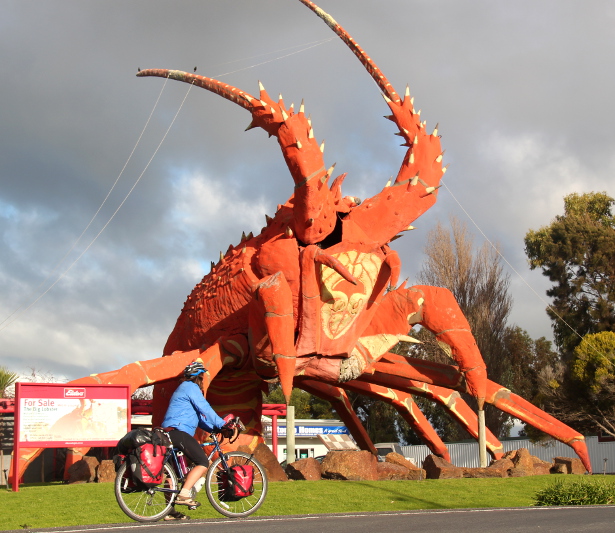 Attacked by a giant lobster in Kingston

We are taking a day to rest up and recover from the colds we’ve both been struck with. The change of climate has clearly weakened our defences – from a steamy 40°C in Malaysia to a frosty tent in a matter of days – but the weather has thankfully started to warm up a bit and we’re reacclimatising to normal temperatures. Another week should see us along the Great Ocean Road to Melbourne, where we are both very much looking forward to a few weeks with family and friends.

Until then, we’ll be keeping a  look out for those streams of gold. 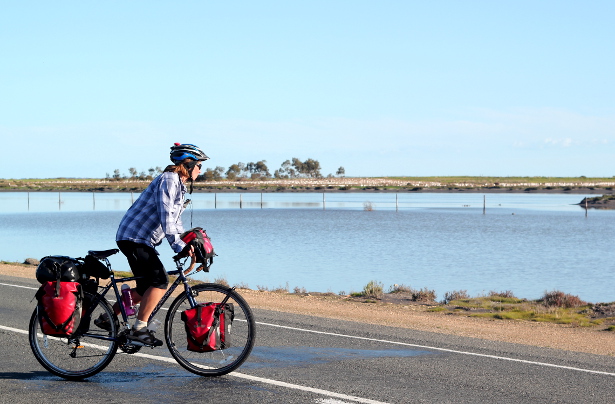 We got new shirts!