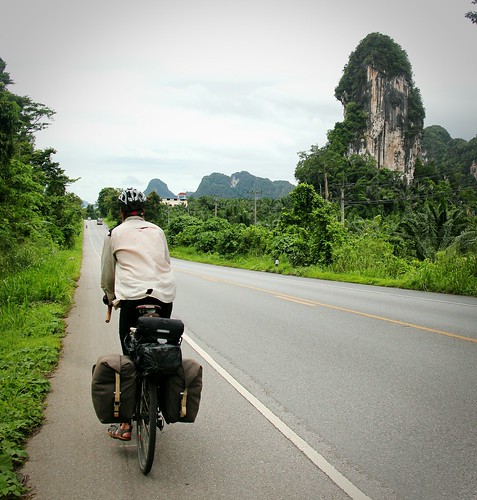 A few years back, a young cycle courier rode his bike around the world faster than anyone before him.

Lots of cyclists keep blogs of their journey but, for me, his stood head and shoulders above the rest for quality of writing.

So I’m pleased to host another article from him today (the first sparked some debate in 2010), especially since it’s to promote his new book Life Cycles.

Except from Life Cycles by Julian Sayarer

Hurrying, riding up the Atlantic coast, South Carolina ebbing towards North… Jamestown, Johnsonville, Whiteville. I rounded a high-winding corner where a house stood alone, a chain-link fence surrounding its grounds, a roof of corrugated tin, dogs… dogs… five of them, no… six! All over the world, dogs had chased me, barking and yapping, and there they were again in North Carolina, six dogs, running at the chain-link fence that kept them off the road.  They hit the fence with a cymbal crashing… unperturbed they run its length, teeth flashing… a gate… an open gate and the dogs are all out on the road. No playful mutts either, no Labrador with a pink tongue and a golden coat… those dogs are the kind that their owners put on treadmills with images of horror in front of them, dogs encouraged to attack and then fed when they do. They pile out of the gate… six of the things and, one in particular, one at the head of them all… small and white, bull terrier, disgustingly ugly, really foul as far as creatures go. Two feet tall, one foot wide and pink gums falling out the side of its face, saliva trickling the length of its teeth and onto the tarmac below. I’m going slow, always slow things right down when pursued by dogs… the best option is giving them nothing to chase. Foolproof, worked every time that one did, just slow it down. Chasing dogs are one thing, biting dogs a different matter entirely. Confronted with biting dogs and slowing down is poor counsel. There I was, at a canter… my six dogs in tow, that white bull terrier in particular, a smile of pink gums in the thick of the action underneath my flank. I look down at it, it looks up at me.

Something was amiss. I felt it in my gut that time… interspecies communication was going strong. Looking down at the thing, somehow closer than normal, it looked to have gotten itself into a position from which to bite rather than just bark. I pedal faster, Body and legs are unsure what to do, consider a kick. Sitting safe distance… Brain overrules it. Legs continue onwards, everything a little uncertain apart from that damn bull terrier, moving beyond the point at which dozens of dogs before it had started a retreat. From where I sat, that stinking creature looked every bit like it was about to bite me and then… there it was, suspended in the air and suddenly looking every bit like it was biting me… and dammit… but it was biting me… it was biting me! As if I didn’t have enough on my plate without a bull terrier biting at my calves.

‘IT F***ING BIT ME!’… that’s what I shout, a perfect description of the situation as it had happened, entirely for the benefit of personal verification and five other dogs. It stops biting me… I’m still pedalling, my leg feels like it has been pinched between finger and thumb of an angry god. The muscle felt bruised, aching at its core but barely a tear to the flesh and just a dot of blood. I pedal on, dogs still at it… the bull terrier, that god-awful creature, still barking at my pedalling legs that had never posed any threat to its chain-link fence and the grotty shack it guarded. I get off my bike, five dogs and the bull terrier around my ankles, noses and its disgusting snout right under both of my calves, a banquet right in front of them and me, limping slowly away, pushing my bicycle to the top of the hill.

You can buy Julian’s new book, Life Cycles, on Amazon >>

[UPDATE: Due to high demand, the paperback edition of Life Cycles is out of stock at a number of sellers. The ebook version is unaffected, more copies have been printed and are on their way to retailers nationwide. Waterstones remains in-stock as does Amazon]