Home Tim's Adventures Honk Once for Hello, Twice for P*** Off

Honk Once for Hello, Twice for P*** Off 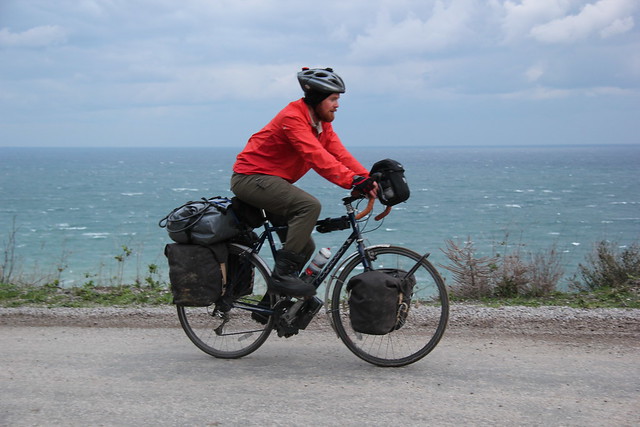 I am developing an involuntary reflex.

At the sound of a horn, without volition, my right arm rises into the air.

Though this may happen against my will, I am quite aware of the cause. Almost every day for the last six months, I have spent several hours at the right hand side of a road, sat on a bicycle, pedalling next to traffic.

The horns are rarely sounded for their originally intended purpose – as a warning – nor for what is frankly the far more common purpose: to express annoyance. No, these horns are overwhelmingly used in support of the cyclist.

I tested this belief in 2010 on a four week bicycle tour of the UK. Every time I heard a horn sound, I would spin around to catch the driver’s eye and see if I could discern their intent. A scowl, head shake or aggressive acceleration I took to indicate displeasure at my presence in the road. A smile, a wave or rhythmic beeping to a popular tune I interpreted as encouragement. I kept track of the numbers and plotted the results on the impartially entitled Pie Chart of Positivity (still available, along with all the other stats of that trip, here).

The results were unambiguous: over the course of 1000 miles’ cycling, 10 honks were served with frustration whilst 74 came with a slice of sunshine.

The scientists amongst you may object to my experiment’s apparent bias towards friendly reactions in the fact that I happened to be pedalling a huge, bright yellow rickshaw festooned with charity banners and a silly orange flag. To this I plead guilty. However, after another 200 days and 5,000 miles of cycling from London to Muscat, I can confirm that the trend continues (albeit without the backup of an actual count this time. We still have detailed stats of our trip but no horn honk tally I’m afraid).

This is a wonderful situation. Every day, dozens of people of every creed, colour and background are emphatically signalling their support for two fellow road users with no other connection than their proximity on the asphalt. It frequently brings me joy to swivel my head and have my gaze met by a truck driver pumping his fist at the wheel, to see a woman giving me a subtle but respectful nod, or catch sight of the tiny hand of a child waving through the rear window.

On good days I almost court it, waving and grinning to every passing car in recognition of their initial bewilderment at the sight of us and then their excitement at realising we must be cycling some distance (clues probably include our heavy burdens, our different clothes and skin colour, our dishevelled appearance and my bushy beard).

But, unfortunately, the beeping is not always so glorious. Sometimes it drives me to distraction. At times, in fact, few things make me angrier. I want to fling my bike to floor, flail my arms in the air and scream: “Why the **** do you keep honking your horn at me!?”

For an individual car to jovially but briefly sound their horn some distance away from a cyclist and follow it up with a smile, a wave or a word of encouragement is a beautiful thing and a joy of cycle touring.

When this happens ten times in a day, its beauty may diminish slightly but it would be hard to not still be a little touched by those small acts of human kindness.

However, when it repeats 1000 times in a day, the continual noise can become – how shall we say? – a little less enjoyable.

But, if that were where it ended – with a 1000 well meaning toots and waves – I could handle it. But it is not.

You bump off the road into the gravel, stumble to an undignified halt and turn around to face your aggressor: a young man at the wheel of a small red Toyota with a beaming grin gives you the thumbs up. You smile back through gritted teeth, give a half hearted wave in return and remount muttering under your breath.

Worse still are the huge trucks that you hear rumbling from behind. Fearful that their many wheels will simply eat you alive without the driver even noticing, your adrenalin is already pumping and your nerves primed when:

Just before the behemoth comes into your peripheral vision, it unleashes 2000 decibels of fog horn from its bonnet directly into your ear and you swerve to one side, terrified it is a signal for you to get out of the way, only to notice that the driver is waving at you with the one hand that isn’t holding down his doomsday trumpet.

Of course, I can’t have it both ways.

No more clearly was this point made apparent than when, pedalling up a hill in Georgia, three cars passed me in convoy:

The first honked the horn. I sighed inwardly but dutifully smiled and waved.

The second honked the horn. I sighed outwardly and rolled my eyes, but still smiled and waved.

The third did not honk. What a jerk!, I thought, he can’t even be bothered to honk his horn.

I can’t embrace and encourage the sound of horns when I am in a good mood then expect those with all the enthusiasm but none of the forethought to time their beeps better (let alone read my mind to know how well it will be received) to remain silent. And I would far rather a world filled with these good intentions and the occasional misjudgement than one in which no one gave me any audible thumbs-ups on the road.

However, for anyone who likes to encourage cyclists on the road, this would be my advice:

Oh, and my advice for cyclists facing a similar bugle barrage? Smile and wave.