How to prevent bike theft 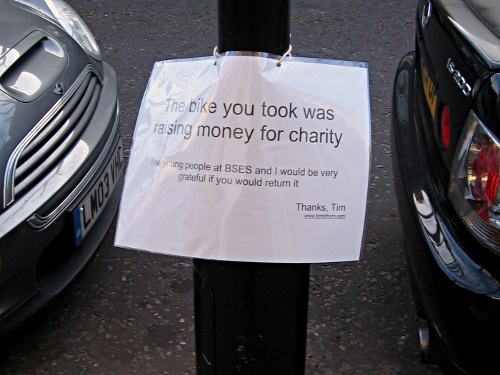 I watched someone steal a bike last month. Right in front of me they cut the cable lock with a pair of pliers and pushed off with it into traffic on Notting Hill High Street. I was gutted.

Seeing the man work frantically with his tool I asked: “Hi. What are you doing?”. Don’t worry, he told me, it was his bike. I didn’t believe him. “I’m going to have to stop you” I said as if rehearsing aloud what I should be doing. He was clearly paying me little attention. His work was nearly done.

What should I do? Grab the bike? Grab him? Call the police? I don’t actually remember what happened in those few seconds but suffice to say I did very little and somebody had their bike stolen.

What good comes of this?

I’ve spent a lot of time thinking about what I should have done and why I didn’t do it. It wasn’t fear or lack of motivation that stopped me acting, it was simply that it was an awkward and novel situation and I didn’t know how to act. I was unsure and almost embarrassed at the thought of “causing a scene”. How absurd.

It served as a reminder to me that sometimes we know what we want to do and what is right but we don’t know exactly how to go about it. Maybe it’s the unfamiliarity of a situation or the fear of doing something different. Be it for preventing bike theft or any other course of action, I hope this experience will help strengthen my resolve in future.

P.S. If it does happen to me again, this is what I hope I will do: