A comparison of every Jetboil-style System Stove on the market. 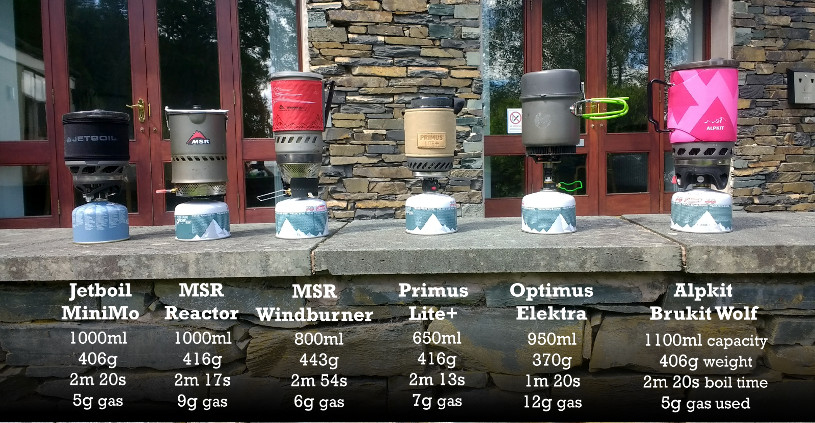 In 2001, Jetboil released a stove that was different from anything else on the market: an all-in-one burner and pot, designed purely for heating water as rapidly and efficiently as possible.

The pot was tall and narrow, wrapped in an insulative sleeve, and came with a heat exchanger on the bottom. The whole thing attached directly onto the burner to create an efficient water-boiling unit.

17 years later, Jetboil has five such stove designs and there are as many other companies now making similar products.

This article compares all 18 of these Jetboil-style System Stoves.

Some of the information compiles what it is publicly available so you can compare the stats.

Other information is taken from my own tests and measurements. I only own seven of these stoves (!) but I will add data on any more that I acquire over the coming months and years.

The tables presented below are: 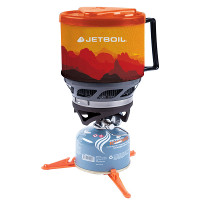 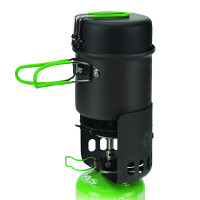 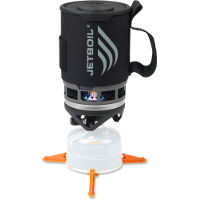 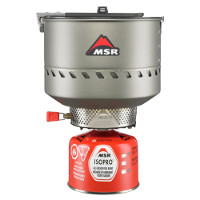 Most stable (and best designed): 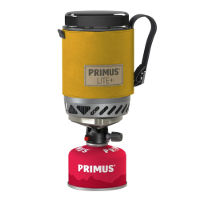 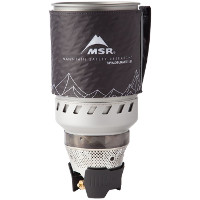 Here is an overview of all 18 System Stoves, showing their weight, capacity and cost, as well as any special features.

Scroll down for further details on all of these stoves. 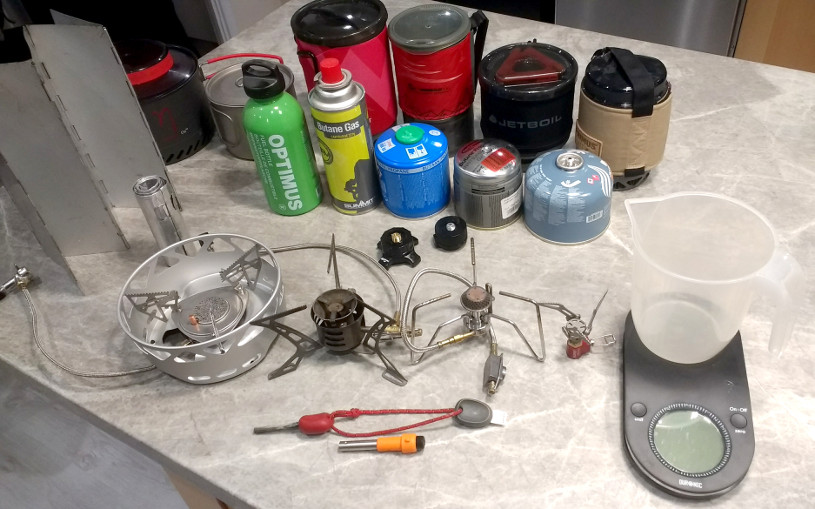 Stove testing in the kitchen

This table compares the speed and efficiency of each stove. It is based on my own tests, not on manufacturers’ information.

I tested the following stoves to see how long it took them to boil 500ml of water and how much fuel they used in the process.

All stoves used a full 230g gas canister and were set to full power. Gas usage was measured by weighing the canister before and after testing.

Each test was conducted twice, and the results below are the average of those two tests.

The amount of gas used ranged from 5 grams to 12 grams:

In conclusion, most System Stoves boil water at similar speeds and with reasonably similar efficiency, with the following exceptions:

I was surprised to find that the MSR stoves appeared to perform poorly in the tests because they have a very good reputation and, personally, the MSR WindBurner is the System Stove I choose to use most often.

Lawrence Friell from ProAgencies, who import MSR products into the UK, was able to explain:

With real world conditions of a 15mph breeze, a half full canister and a balmy winter’s day, the results would be turned on their head. Speed of boil time is one metric, but it’s also the same as saying how fast you can use fuel.

We all know that gas stoves work better when your canister is full (the pressure’s higher, around 50psi). That’s why I tested all of these stoves with a full canister.

However, the MSR stoves are regulated to always operate at lower pressure, regardless of how pressurised the canister is. That means they will maintain similar boiling speeds whether the canister is full or half empty.

WindBurners and Reactors are regulated at 12-15psi, so they’ll provide you with pretty much the same boil time for the lifetime of the canister. On a windy day, with a half full canister most of the competition will struggle to boil water.

Ideally, I would run these tests again with half empty canisters (and probably in the wind too). But I’ll have to save that for another day. 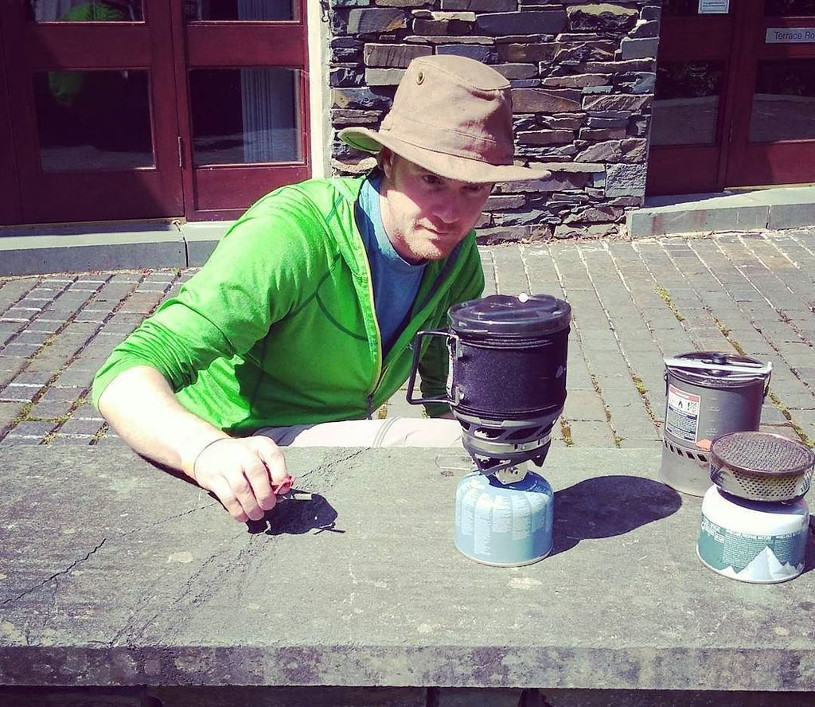 The weights of the different stoves are displayed below.

The lightest Jetboil-style stoves are the Jetboil Zip at 345 grams, followed by the Primus Lite and Lite+ at 360g and 390g respectively, then the Jetboil Flash at 400g.

The Kovea Alpine EZ Eco is one of the heaviest at 770g, but this is misleading since it includes its own internal gas canister.

Predictably, the larger stoves tend to offer the best millitres per gram (e.g. Jetboil Sumo and Joule, and the larger MSR Reactors). Often because they have the exact same burners as small stoves, just with bigger pots attached. 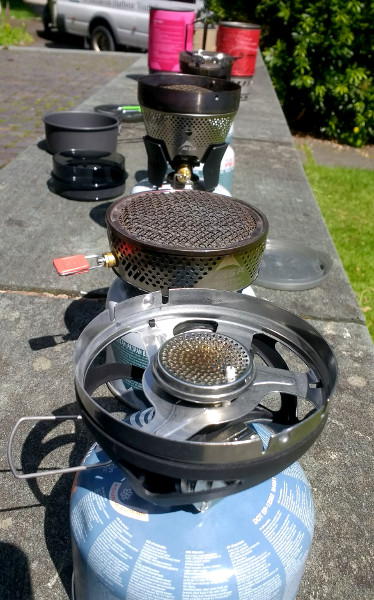 The volume and dimensions of the stoves are displayed below.

System Stoves tend to be tall and narrow. As such, they are often unstable and liable to toppling.

As such, I’ve done a crude calculation of each stove’s “centre of gravity”. A low value indicates better stability, a high value indicates a greater chance of the stove tipping over.

(It’s calculated as the height above ground of the bottom of the inside of the pot when using a 230g canister, plus a third of the pot’s height).

The stoves with the lowest centre of gravity are the Primus Lite and Lite+ at 18cm. That’s a conscious move by Primus, whose “Laminar Flow Burner Technology” allows for a shorter burner height.

The MSR Windburner has the highest centre of gravity at 23cm. I really like this stove but it does indeed feel quite high off the ground. 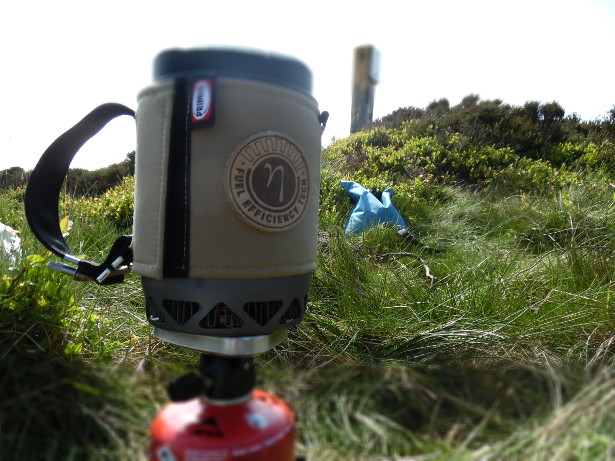 A summary of other key features. 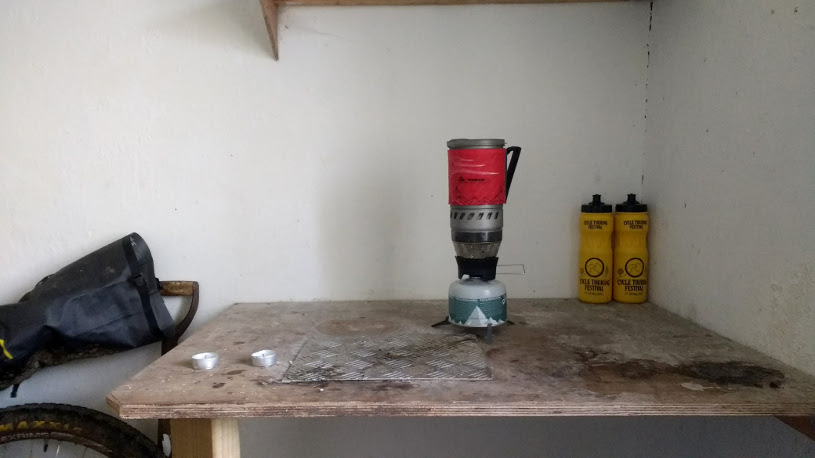 How many Jetboil-style System Stoves are there?

Here is a full list of every System Stove on the market (if I’ve missed any, please do send me details!):

Many of these are just different names for the same stove with a different sized pot attached.

With the MSR Reactor, that’s pretty obvious from the names above. But with, say, AlpKit, it’s not immediately obvious that the BruKit Jackal and BruKit Wolf are exactly the same stove except for the Jackal having a larger pot on top.

There are actually just 11 different “Jetboil style” stoves (burners) on the market:

Below are links to check the prices of all of those stoves on: Amazon, REI in the US and whatever UK shop has the best price.

If you’ve found this article useful then please do consider clicking one of the links below before making a purchase. At no cost to you, I’ll get a small percentage of anything you buy.

That’s it folks. Let me know if I’ve missed anything, if you have data on any of the stoves not tested, or if there are other System Stoves that I’ve missed out.