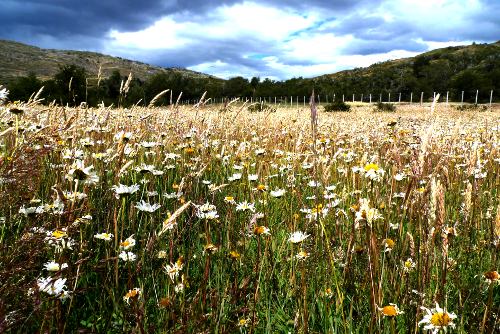 After the tough two days at the start of our trip, we resolved that no subsequent days should be as long. Well, they may have been reduced in length between Chalten and Tres Lagos but they were no easier. Hot, hard, with relentless 24-hour wind and a parallel road of traffic undermind any value in our endeavour.

For a number of reasons, Laura was not enjoying this stretch of the trip and was questioning whether we should continue. Quite reasonably, she followed the thought process that unpleasantness, hardship and lack of enjoyment were all valid considerations when weighing up whether or not a trip was worth pursuing.

There is nothing unusual in that but what may be more telling is that I realised that such factors have almost no bearing on me. I might avoid signing up for a trip that sounded awful but, once underway, my definition of enjoyment is so broad that I suspect I would nearly always draw some satisfaction from an experience, regardless of the difficulty and discomfort. Perversely, a part of me gets some enjoyment through a lack of enjoyment.

Perhaps it is because the contrast when it’s over is all the sweeter or just the result of curiosity. And it’s not to say that I don’t suffer like the next person, nor am I an outright masochist (I don’t think!), just that it would never occur to me to change expedition plans a result of hardship.