Home Living Adventurously Proof That Anyone Can Cross a Desert

Proof That Anyone Can Cross a Desert 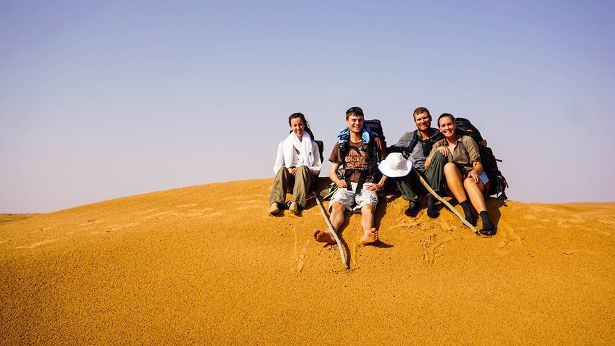 I started this blog six years ago to encourage people to go on adventures and help them where I can. People email me questions all the time. I write back to every single one but many never even reply to say thanks.

So it was supremely gratifying to receive an email the other day from a young lady who had read my blogs about crossing the Wahiba Sands, contacted me for some advice about having a go herself, flown to Oman, walked across the desert then got back in touch to say what a good time she’d had.

I’m often concerned that going on trips, taking glossy photos and sending dramatic Twitter updates can actually put people off going on expeditions rather than encourage them because it makes it seem other worldly or like something that only “adventurers” do. That’s not the case. Anything I’ve done, you can probably do too and more.

I’m pretty sure Ellie had never done a desert expedition before she set off into the Wahiba Sands (nor had we, for that matter) but it sounds like she had a great time.

In short: you can cross a desert.

Read on to hear Ellie’s story from Oman as well as some advice on desert expeditions.

Firstly, thanks for your website! We are 4 friends who play ultimate frisbee and are coming to the World Champs in Dubai in March but wanted to stay out longer to adventure in Oman. We were looking for an adventurous trek in Oman and were getting a bit despondent with all the information only regarding touristy things….then we found your site! It’s awesome.We are thinking about copying your Wahiba sands trek. We are all fairly hardy (2 of the group cycled from Australia to London last year for example and another mountaineers in Iraq) but if you have any advice (other than what we can get from reading your blogs) that would be awesome!! We are planning on arriving in Muscat 14th March.

Would we be able to hitch out to the sands or book a driver rather than hiring a car? What tents did you bring? Do you need a separate tarp or would tent fly work? Did you use gps waymarkers? Did you pass desert camps? Do they let you fill water? Did you pass oasis? Can you filter and drink that water? We are also considering walking north – south, from near Bidyah, then veering westwards to the ocean road. Partly to align more with the dunes, and partly just for something different. Do you know anyone who has gone this way? It appears to be further, but potentially easier walking? Thanks! Ellie

(UPDATE: Er, I’d forgotten about the bit where she said two of them had cycled from Australia and another mountaineered in Iraq, as well as being world class fribsee players! I still stand by the idea that most people could do this trip though…)

Thanks for your email. It’s not often that I get them from potential World Championship Ultimate Frisbee players!

Wonderful that you’re thinking about going across the Wahiba. One of my all time favourite expeditions. And, best of call, cheap and very doable by hardy amateurs (of course, being wary of the heat issues).

First off, did you see that I’ve just launched an ebook called How To Cross A Desert? It’s on offer at £4 until the end of the day – http://thenextchallenge.org/two-ebooks-launched-today/

In answer to your questions though…

Hope that helps but feel free to fire away with more question if you need. Finally, I get a lot of emails from people and often never hear back. If you guys go on this trip though, or even if you don’t, I’d really love to hear how you get on. It’s such a special place.

All the best,
Tim.

Thanks for your email!  All super useful. The only other question I had was: How cold does it get at night?  Forecasts for late march say night time temperatures of around 12 celcius, but this might not be in the desert?  And this isn’t particularly cold. I know it will feel colder due to the contrast to the day, but warm clothes of a fleece and a hat would be sufficient? Or do you think more layers would be useful? Thanks!

Hi Ellie, a fleece and a hat should be more than enough. The coldness thing in hot deserts is definitely overrated! If you’re worried then you can get a synthetic Primaloft jacket that weighs less than 200g but is much warmer than a fleece. Good luck! 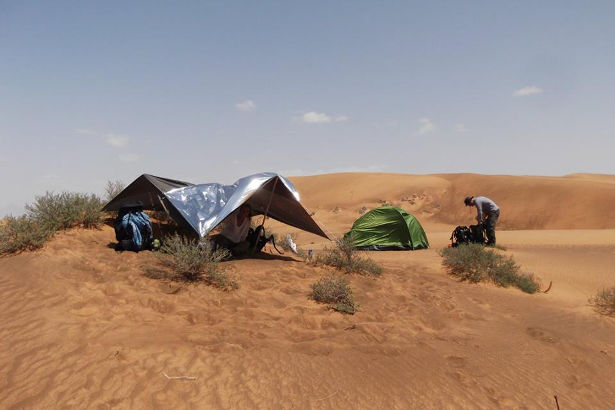 I play a lot of ultimate frisbee, which is an awesome sport and also takes me round the world to tournaments. I usually try and tack on an adventure of sorts to most frisbee tournaments, so I don’t come home having just seen the pitches and a hotel. So after Beach world champs in Dubai, 3 of us decided we were going to head to Oman. We were googling what to do in oman but mainly only found group tours. The trips looked great but we wanted to do something by ourselves, without a guide, and were struggling to find something. Then we found Tim’s awesome website!  (Unsolicited comment! – Ed.)

His blog on crossing the Wahiba totally inspired us and we decided to copy! Jess, Dan, and myself came over from Oman, met Ali (another frisbee-er) in Muscat and after some incredible Omani hospitality headed out to the desert. We stopped to pick up food (mainly consisting of: enough dates to feed a herd of goats for weeks, not nearly enough crackers, and the most wonderful pouches of tuna) and 56 litres of water – 12 each and extra for sweaty Dan :)

We decided fairly last minute to walk east to west (so we could tumble down the much steeper west sides of the dunes rather than try and scramble up them). The road on the west is much much smaller but we felt blindly confident that there would be someone there to give us a lift to the towns on the north.

Driving down the eastern edge, we asked our driver to turn off the main road and head to the dunes, he calmly drove as far as he could until the car got stuck in the sand! We pushed him out, waved him off and set up camp in the dark, at the edge of the desert, in the middle of nowhere…only to wake up to a full herd of Bedouin’s goats staring at us from their pen, 50metres away! 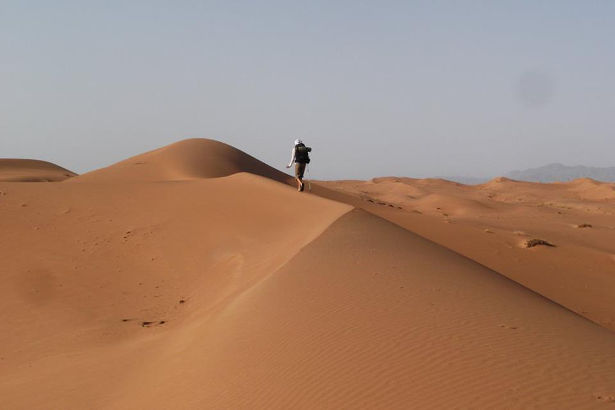 First day was really tough – packs were heavy, sand was soft, too hot to walk barefoot, and the dunes, although smaller this side of the desert were constant and never-ending. We stopped during the hottest part of the day, put up a tarp and our 1 tent to shade the sun and just lay there, playing i-spy, trying not to drink too much water, and willing the cooling wind even if it did cover you in sand!

Towards the end of the day, the wind really picked up and over dinner we saw a huge lightening storm. We knew it wouldn’t come our way though because it doesn’t rain in a desert. Except that night it did. It only rains 2 or 3 times a year in Oman, but this was apparently one of them as we all huddled in the 2 man tent avoiding the wild rain and thunder. We had a nalgene out to collect precious water but didn’t last long enough for more than couple of mouthfuls. It did mean that the sand in the morning was much easier to walk on, and the snake we came across was too cold to barely move!

Unfortunately Jess strained her hamstring on the steep dunes and so we changed course and headed for Bidiya (town to the north). The air was much clearer and so the sun was even hotter. The dunes were big but the sodden sand made it a little easier. Jess and Dan heading out of the desert at Bidiya was really sad to break up the group but we decided to continue. It did also mean we glugged some of their water. Never drunk a litre so fast, or felt so sick afterwards!

Ali and I headed due West again and pushed on into the night, guided by the not-so-famous, but incredible West star! We made a lot of ground and although the dunes got bigger (and dried out), they also became more regular with wide valleys between major north-south running dunes (with lots of not-so-little minor ones too).

On the last day after middle-of-the-day shade stop, with only 4 major dunes (about 7km) left that we could count on our googlemaps print out, we found camels to stalk and other Nomadic herdsman to chat to. However, coming down the final dune at sunset we couldn’t see anyone! It was hours walk across scrubland to the nearest town and we were very tired. Luckily a truck approached us and said their family was having a party nearby and did we want to join? They gave us (more) dates, coffee, and a whole meal of fresh goat and rice. And then drove us to the town! Amazing.

A lack of phones made finding Jess and Dan pretty tricky but we did and all necked pepsi’s and dove into a river together! 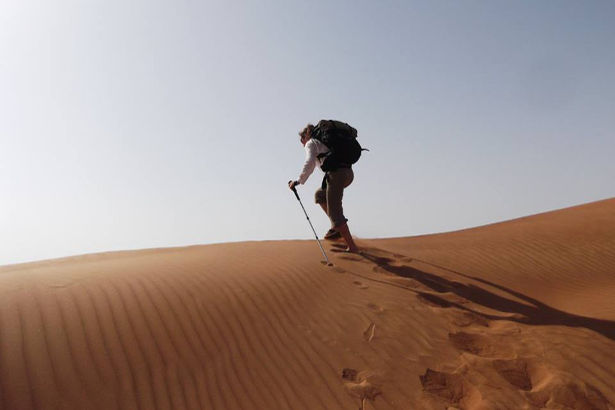 Information for anyone considering a desert expedition

How to Cross a Desert eBook

How to Cross a Desert