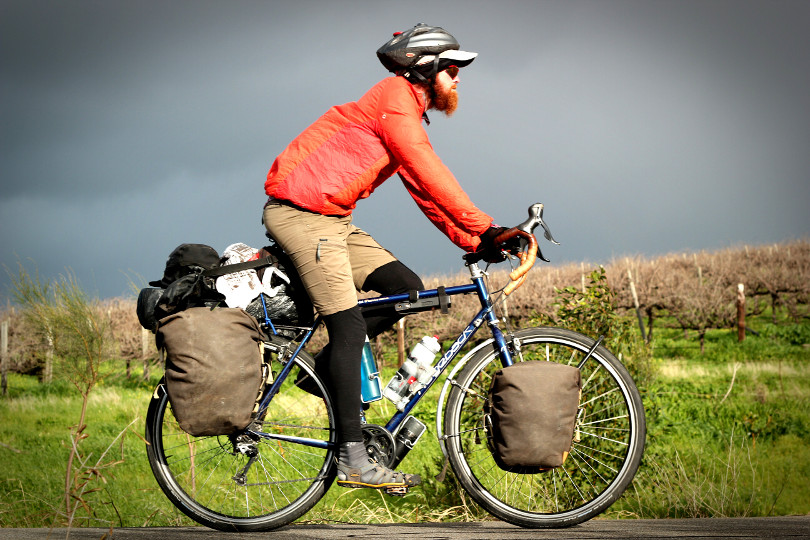 Many people reading this will know that, a few years ago, I set off to cycle around the world.

What fewer will know is that the trip almost never happened due to issues with my mental health.

Two days into a training ride, I had a break down and had to go home. Over time, I lost all will to exercise, became scared of social interactions and, eventually, just hid behind my bed (literally). As a result, Laura and I had to cancel our round-the-world plans.

But when I came to write the book about our trip, I found it was impossible to give an honest account without discussing the problems I faced.

Here is an extract from the prologue of my book, where I discuss the impact of the depression:

With the Sun on Our Right: Prologue extract

As part of our preparation, we decided to cycle from Land’s End to John O’Groats. We had done several cycle tours before but thought that we should see how it felt to go away, knowing that the experience might be extended for a year or more. On the second day, however, Laura looked over her shoulder to see me pushing my bike uphill. She was perplexed. I had never needed to get off and push before.

‘You alright, love?’ she asked.

‘I just don’t seem to have the energy.’

This was odd because I rode my bike all the time and had recently set the Guinness World Record for the longest distance cycled on a rickshaw. That had involved pedalling a huge, iron tricycle 1,000 miles from Scotland to London. As such, cycling up a hill, even a Cornish one, should have been fine.

When evening came, for some unknown reason, I could not face camping. Normally, I viewed camping as an opportunity, not a hardship. I loved nothing more than sleeping on top of a hill beneath the stars, but that night, I could not bring myself to do it. I was almost scared of it and Laura eventually had to find us a hotel.

We started on our bikes again the following day, but when we reached a town, I told Laura that I could not cycle any further and needed to sit down. She went off to get me some food (knowing that hunger was often the source of my problems), and by the time she got back, I was sitting on the floor with my head in my hands, crying.

I prided myself on never giving up. I was constantly looking for challenges and always driving myself harder. In Oman, for example, I used to ride a loop of the local oil compound every morning before breakfast and cycled so hard that when I slumped over my bike after achieving a personal best, passers-by would stop and ask if I was OK.

Those feelings had been building for several months. Years of working at home, on my own, had been taking a toll. I often had no human interaction for days at a time and I had not been making a lot of money either, which, combined with the recent loss of a key client, ate away at my self-esteem.

These issues all came to a head in Cornwall, and the only response I could muster was to sit on the floor, crying.

‘What’s wrong, love?’ Laura asked when she came back from the shop.

The doctor told me that I had depression. I was expecting that but pressed him on what was physically wrong with me.

‘OK, but why am I so tired all the time? Why can’t I run or cycle anymore?’

‘You don’t understand,’ he said. ‘That’s the depression too.’

I tried to pretend that this would not affect our plan to cycle around the world.

‘I’ll be alright once we get going,’ I said.

For years, I had been looking forward to this trip. I was not willing to accept that this was an illness that would prohibit me from disappearing on my bike for a year. I just convinced myself that everything was still on track for our departure.

But the evidence was in front of me. As well as having no will to exercise, I became scared of social interactions. I would dwell on the slightest negative comments for days and, eventually, just avoided talking to people. It got to the point where I felt the need to physically hide. Laura came into our bedroom one day to find me curled up in a ball behind our bed, with my eyes clamped shut and my fingers rammed into my ears. I felt completely overwhelmed and needed to shut the world away.

This odd defence mechanism grew into a habit. It became so normal that I even hid behind the bed when my parents came to visit, and sometimes Laura would have to bring my dinner to eat on the floor, curled up in the corner of our bedroom. A year earlier, I had crossed a desert, run an ultramarathon and broken a world record. Now I was reduced to hiding under beds.

Still, I could not let myself believe that anything would get in the way of our big trip. It was the one thing that I was holding on to and I was not yet ready to let it go. I insisted that I would be fine, and we pressed ahead with planning our ride around the world. But when Laura tried to hand in her notice at work, she was crying so much that her boss suggested she take a little longer to think about it. She knew that I was not in a fit state to go travelling and, slowly, she helped me realise that myself.

With time and treatment, I got better and, the following year, we set off to start cycling around the world (which is what the rest of my book is about).

Why I am writing this now

It’s easy to portray a certain version of yourself through social media. In my case, I just show the adventurous side and I do that to encourage others to undertake adventures themselves.

However, presenting a professionalised persona risks perpetuating an ‘us’ and ‘them’ situation in which adventurers with slick websites make it look like adventure is only for professionals with specialist skills and corporate sponsors. It is not.

That is the reason I publish the costs of my expeditions and the earnings of this website. It shows that my trips are not expensive or funded by sponsorship. It is also why I showcase other peoples’ adventures (like these guys crossing the Wahiba and everyone who’s won my grant). I want to ram home the message that anyone can have an adventure and that, just because I have a blog, I’m no different.

I hope that, through this website, people will see that it is OK to go on an adventure without expedition experience and without corporate sponsorship.  And I hope that by adding to the chorus of adventurers* speaking about their mental health issues, people will realise that that’s OK too.

(*Like Sarah Outen, Emily Chappell, Kev Shannon, Juliana Buhring and Jake McManus, to name a few off the top of my head).

With the Sun on Our Right 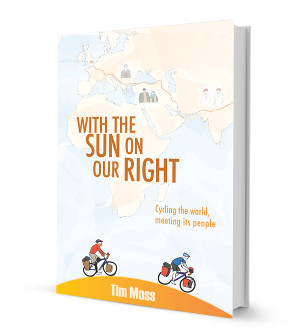 The full story of Tim and Laura’s 13,000-mile round-the-world cycle

330 pages plus 8 pages of colour photographs