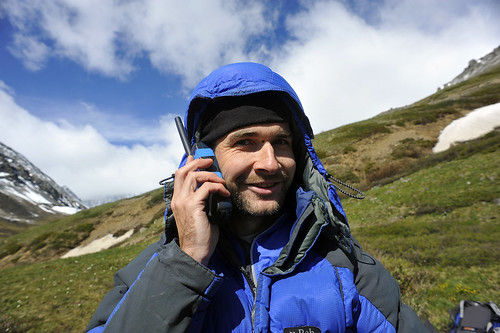 Satellite phones, or ‘satphones’, are simply phones that send and receive signals to and from satellites rather than through cables or via phone masts. They are useful on expeditions and for remote travel because, with the right satphone, you can make and take calls from anywhere in the world.

Below is a brief introduction to satellite phones including what they can do (such as sending emails and receiving text messages), how much they cost to buy, hire and call with, and a comparison of different providers of satellite phones and networks (Iridium, Thuraya and Inmarsat).

Although the method varies between models and providers, most phones are capable of  the following:

If you want to take a satphone on an expedition with you then you can either buy or hire one. Handsets cost around £500-£1000 and upwards to buy. Hire costs are below. Call rates, usually billed in US dollars, are typically around £1/minute or so though do vary.

You can find sat phones for hire and sale easily through Google but here is a brief overview from a few minutes of my own Googling:

Iridium are the longest running provider of satellite phones and network. They have “truly global coverage” and are the only provider that covers the Arctic, Antarctica and both poles.

They rely on a large number of ‘low earth orbit’ satellites which means that tall buildings, trees and mountains can block signal. The satellites are also not geostationary which means that signal can vary even whilst you’re standing still and calls can quite frequently cut out. Voices through the Iridium network tend to sound a bit robotic.

A recent competitor to Iridium, Inmarsat covers most of the globe except for the top and bottom i.e. Arctic and Antarctica. Unlike Iridium, they use just a couple of geostationary satellites with a much higher orbit which means calls are dropped less often and less subject to being blocked by tall objects.

(Shortly after Inmarsat enter the marked, both Inmarsat and Iridium commissioned their own “independent” reports comparing their own satphone to the competitors. Needless to say, they each found opposite results. You can view the PDFs online: Inmarsat’s TelAstra report and Iridium’s Frost & Sullivan)

Thuraya have a similar geostationary network set up to Inmarsat. Thuraya phones tend to be smaller, lighter and with more features like colour screens, the ability to use normal GSM SIM cards, multi-page text messaging and faster data transfer. Their satellite coverage is regional however so you should check whether it covers where you want to go.

There is a useful collection of satellite coverage maps at Global Telesat.

Globalstar, who make the Spot trackers, also offer a satellite network and handsets, and Orbcomm have a network too.

Communication via satellite is used in some other technologies beyond satphones including the following: