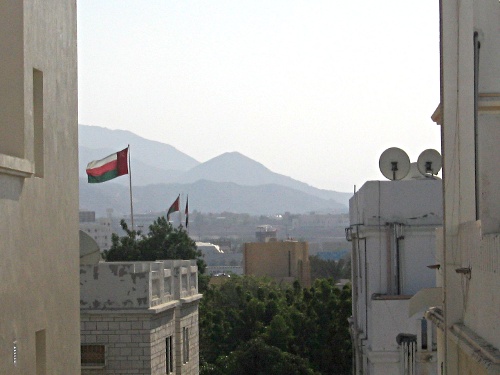 The first touch of the chilled water felt good against my skin. In England, outdoor pools are heated but here in Oman, they’re cooled.

The warm up was 200-metres of front crawl. I hadn’t really done serious lengths for over a year now. Not since I first hurt my shoulder.

I’ve been avoiding hard swimming and playing hockey, or anything else that might aggravate my shoulders, for so long now that I had started to let myself get excited about doing them again. Signing up for a local hockey team, picking out islands on a map that I wanted to swim to. And that excitement had overpowered the logic: Every time I repeat a stroke or swing a stick, my shoulders hurt. Why would it be any different now?

It was the right one at first, about this time last year. I wrestled the frustration of rest, did my physio exercises and it got better. Just in time for the same thing to happen to the other shoulder.

That was at the start of the year and, despite more than six months of the same treatment – rest and rehab – it’s no better now.

By the last 50-metres, I could feel a bit of soreness. I got out and tried to find an exercise that would loosen it up. I kept trying until something twinged. My shoulder tightened and my heart sank.

I walked quietly to the changing rooms, sat on a bench and got angry.

Angry for me doesn’t involve much in the way of outwardly altered behaviour. I mostly sat and read a book. A Kindle electronic reader actually, and I fought the urge to smash it on the bench.

I prayed that someone would come and ask me if everything was OK so that I could tell them “Yeah, it’s fine” in a way that obviously wasn’t. So I could make a melodramatic comment about my poor shoulder then play it down like a martyr. I yearned for some outlet for the rage of injustice.

But as much as I wanted to indulge my mood, revel in the self pity and woe of my predicament (all of which I was doing and continued to do later on), I knew it was unproductive. I put the book down, placed my hand against the wall and began the well-drilled routine of the past months. Exercises to strengthen my muscles and correct my posture.

Saturday evenings, I will not be joining the self-deprecatingly entitled ‘Muscat Elite Swimming Team’ in the pool. But I do intend to turn up to their meetings. Not to torture myself with the sight of people enjoying a good swim. And not as the sad, clinger-on who can’t let go and still wants to be a part of the crowd (not me, I hate crowds).

That hour that would have been spent swimming can instead be dedicated to making me better and able to swim properly again sooner. And by writing it here I hope it will help provide the motivation when it is otherwise lacking.