1) It’s not that difficult, and gets easier

Before we left the UK, many people asked what training we were doing. Although we cycled most days in and around London, during the final few weeks before departure, training largely consisted of eating and drinking too much, watching DVDs and driving up and down the M6 as we packed up our lives.

You do not need to train. If you are not particularly fit at the start, you soon will be. Before long, you will be flying over Alpine passes, singing as you go.

(There is a certain breed of round the world cyclist who covers 100+ miles each day. If this is your style – it is definitely not ours – you may consider training).

2) You rarely get a sore bottom

With a decent saddle (we highly recommend Brooks), you probably won’t even need padded shorts. Saddle soreness has hardly been an issue at all.

3) The biggest battles are mental ones

Cycling can be boring. Pootling along for mile after mile with the same scenery for company, there is often not much to think about. With homesickness and frequent mood crashes as a result of not eating or drinking enough, a trip like this can be an emotional rollercoaster.

Cycling with your best mate alongside helps, but brings its own difficulties as each must tolerate the other’s ups and downs. The mental realm, far more than the physical, is where the real challenge of this trip lies.

4) Most people are good people

The vast majority of people we have met have welcomed us with open arms and more often than not, plates of food. We’ve been given endless cups of tea in Turkey and at the time of writing, are effectively being held hostage by an over-zealous host.

‘For those who have lost faith in humanity, my advice would be this: get on your bike. For bicycle travel and cynicism are surely incompatible.‘

5) Dogs are your worst enemy

I love dogs, but dogs do not love bicycles. We are constantly barked at and occasionally chased – one dog crossed four lanes of heavy traffic to chase me up the hard shoulder. However, we have learnt that most dogs are in fact cowards and stopping, shouting and pretending to throw stones usually makes them turn tail.

6) You can have a whole conversation just using your eyebrows

OK, this one might be an exaggeration, but body language is certainly a crucial part of cross-cultural communication. However, it is not always a simple matter and different gestures carry different meanings, depending on the place.

Raising your eyebrows and tilting your head back could mean a variety of things: ‘there is no more left’, ‘Dubrovnik is that way’, ‘are you up for it?’ or ‘look in that cupboard for the serviettes’.

Touching your fingertips and thumb together with your palm facing upwards may mean good (Turkey) or could be an expression of irritation (Oman).

Even shaking your head is not always straightforward. 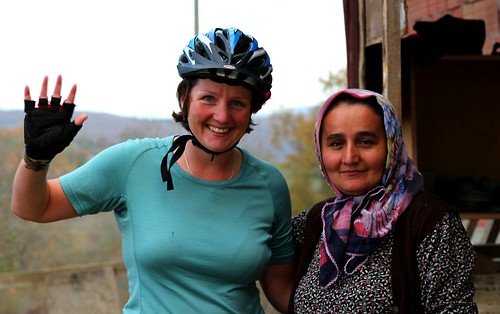 7) The putrid stench of roadkill will haunt you everywhere

Cycling close to the verge means you see a lot of roadkill, usually smelling it several metres away. Dogs, cats, snakes, rabbits, foxes…the list goes on.

You just might not lose any. I sometimes think of a bike tour as an extreme diet plan, but biscuits and Nutella get in the way a bit.

It’s about the people we meet.

We pedal away from one encounter, having been treated like royalty in a roadside cafe with a free meal and place to sleep. The whole staff turn out to wave us off. Six hours later, we pull into another cafe as it’s getting dark, and exactly the same thing happens.

We need to remind ourselves how privileged we are to have these experiences and that, however many times we are offered such overwhelming hospitality, not to take it for granted. However normal this life feels to us, we are a big novelty for most people we stay with.

The humble bicycle is by far the best form of transport. It offers the perfect speed with which to see the world, immersed in the landscape and atmosphere around you. Life in the saddle also offers plenty of time for contemplation and meditation.

In a bad mood? Get on your bike, it won’t last long.