Home Living Adventurously The Land of the Midnight Sun

The Land of the Midnight Sun 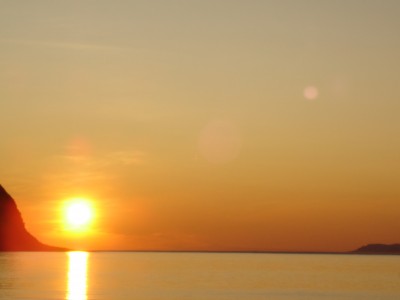 Over the four weeks that I’ve spent on expedition with BSES in Norway, the activities have been split roughly 50/50 between mountaineering and kayaking. I have been land based throughout but my fellow leader and new friend Lucy Bound spent some time on the water and has kindly allowed me to upload a sneak preview of an article she has written about her experience. Here we go:

“It is not often you get to see a sea otter pushing its velvety head through still waters, dark eyes watching you gingerly 12 feet from your boat, or perhaps a sea eagle soaring gracefully above, expertly catching thermals. But in Nuvsvåg, 250km north of the artic circle such Norwegian delights await anyone from the novice to seasoned sea paddler.

This once-in-a-lifetime experience came through a month long expedition with British Schools Exploring Society, a charity set up to provide 16 – 20 year olds with an opportunity for exploration and personal development. BSES prides itself on adventuring to remote places the average gap year candidate would unlikely reach. The leaders for this expedition were an impressive line up of highly experienced paddling and mountaineering coaches.

Nuvsvåg was our base-camp location, a small hamlet of 100 people perched on one of the countless fjords which interrupt the pristine coastline. A blink of the eye and one could be paddling in the Scottish Highlands, until closer inspection reveals the high mountain backdrop of the glacial plateau. There are a mere 17 children in the local school, and our local contact Oddvar Berne, and his effusive wife Anne Marie told us that migration of the younger generation is a growing problem. “It is a very sad day for us when we see the fish drying in the nets” she tells us, “this indicates the fishermen cannot get the fresh fish to the markets in Alta to sell”. She goes on “if they cannot do this, they must hang it until the autumn where the dried fish fetches a lower price; unemployment is a real problem for us here in Nuvsvåg”.

The expedition operates in small teams called Fires, as founder Surgeon Commander Murray Levick (Scott’s Antartic expedition 1911) believed this was an optimal number of people to converse around a fire. So with a group of 6 ‘Young Explorers’, myself and fellow leader Chris Heaney set off for a week of discovering what the Land of the Midnight Sun had to offer.

As Norway has relatively liberal attitudes towards wild camping, we were able to head out along the coastline with a l:50 000 map (sourced at Stanfords) and find a suitable camping spot when we were ready to get off the water. In July, there is still good run-off from the snow melt so fresh, [cold] drinking water was rarely a problem to source. What was more of a nuisance were the carnivorous insects whose favourite feed was clearly freshly salted man flesh, thankfully less present at the breezier camping spots.

We soon realised how the 24hr sunlight added flexibility to our journeying. We dodged stronger winds and unwanted tides by paddling early morning or through the night (night – being purely a theoretical concept which took some getting used to). Due to the high pressure system; we enjoyed a dramatic sun setting scene – cameras at the ready, only to witness the sun touching the watery horizon and then tracking majestically back up into the sky. It was a strange thing to set up camp in a shaded bay early evening, only for the sun to move into view and slowly warm the rocks as the night progressed.

Once we were out of the Nuvsvåg fjord we headed east towards neighbouring Oksfjordjen. This fjord was home to a school of porpoise who kept a regular fishing schedule of early morning and late evening, providing us with one of those rare moments in life where the natural environment is so breathtaking it is hard to take it in.

We carried some rudimentary fishing kit, and with a few false starts caught trout on a hand-line from the boat. We were warned by local fisherman that the catch in the area would easily take a sea boat under so took to fishing in pairs, so at least it could be captured on film as the boat was being taken down by a 50lb halibut. Sadly no such footage was made so we settled for a dinner of more manageable catch within moments of being caught. Mussels were another delight; similar in size to their UK counterparts and abundant at every beach we landed at. This proved a highlight as the group got quite well versed at subsidizing their ration packs.

We headed up Oksfjorden away from the small village towards more remote waters where the occasional summer house was the only sign of human life. Many people come to the area to fish during the summer months returning south as the long winter sets in. “You have to learn to be at peace with yourself” a local told us. “Some people come to live here because it is so beautiful, but then they cannot cope during the winter darkness”. During the dark months of 1944, when this part of the world was invaded, a handful of Lap people over-wintered in nearby caves. Although open and friendly, it is clear that the people of these parts are hardened to their environment and have a strong sense of survival. The weather especially, notorious for being fickle clearly puts those who get in its way to the test. There is a small obelisk in the church yard, family names listed of those lost at sea. Still waters were punctuated with clear storm damage, fishing nets cast high into shoreline trees.

We had a couple of nights at the far end of the fjord, carrying out some scientific research on behalf of the State of the Environment, a Norwegian government department. The science element of the expedition gave the group a chance to engage with the marine environment beyond being mere tourists. Additionally they were able to put something back into specific research projects. With the migration of the formidable king crab into the area, researchers are keen to gather some base data to investigate the longer term effect of this new visitor to the fjords.

A misty morning shrouded our return journey to base-camp, spotting more porpoise along the way. By way of a departure gesture, a white tailed sea eagle escorted us out of Oksfjorden. Unbelievably, these kings of the sky have a larger wingspan than their golden eagle counterparts. As we drew into the beach where we had started from the previous week, the group were unusually quiet and seemed loathed get off the water. This part of Norway had been described to us by a resident as absolute paradise and as our journey concluded we felt unable to argue with such a claim.”