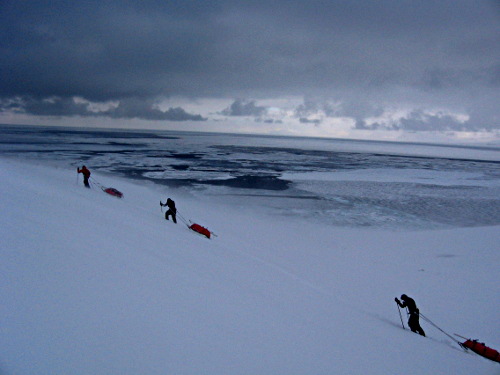 Having recently become a Fellow of the Royal Geographical Society, I am now able attend their great selection of members’ event. One recent such event was a talk by Lewis Gordon Pugh about his swim at the North Pole. It was an entertaining presentation about a great feat but it also set my mind racing on the cycle home afterwards. Here are a few things I learned from his talk (or which Laura learned and I’ve stolen for my blog)…

There are no two ways about it: Lewis Gordon-Pugh gives a great presentation. I would never have assumed that the few talks I give would be in the league of a big player like Lewis but he really showed me how it should be done.

A part of me instinctively shies away from suggestions of “techniques” I could use to deliver a good presentation, thinking that they’re merely tricks and it should be the message that’s important. But Lewis’ talk was really good and I’ll gladly accept that I shouldn’t perhaps be so stubborn. So, thank you kindly Mr Pugh, I will be adopting some of your techniques for my next talk!

2. It’s OK To Get Straight Into A Hot Shower When You’re Cold

Straight out of the Arctic Ocean, onto the boat and into a scalding hot shower. That was Pugh’s tactic and totally against conventional advice, I reckon. Aren’t you supposed to warm up slowly? I am not a medical expert and I am certain that the case is different for acute cold injuries (e.g. frost bite) but Lewis had a team of scientists and is obviously very experienced with extreme cold water swimming so I’m inclined to believe that it’s probably true: when you’re cold, getting into a really hot shower is a really good way to warm yourself up.

Does anyone have any thoughts on this?

Near the start of his talk, Lewis cited humility as one of the personality features he regarded most highly and something he particularly valued when selecting his team mates.

A little later he described the moment when he was supposed to dive into the Arctic Ocean for his 1km swim but baulked at the last moment. He explained this by saying that he was worried for his mother and the thought of leaving her alone should he not make it.

There’s no reason to doubt that was what he was thinking but surely a part of him was just plain scared too? And who could blame him!? Maybe he wasn’t. Maybe he’s a Man of Steel. But if he was just a teeny bit scared and he’d only said so in his talk then his words on humility would have carried greater gravitas.

4. Pavlov Can Warm Your Soul

It is well known that you can acclimatise yourself to cold water through repeated exposure. What is perhaps less well documented, however, is the ability for the body to raise its internal temperature in anticipation of a swim. The great swimmer Lynne Cox, who swam a mile in Antarctic waters many years before Lewis’ Arctic dip, experienced this phenomenon too.

The most obvious explanation is that its a mechanism of Classical or “Pavlovian” Conditioning whereby your body associates certain stimuli surrounding the moments before a cold swim with the inevitable lowering of body temperature once you’re actually in the water and thus acts to warm you.

When asked what he was listening to on his iPod before starting his swim he gave a story about a chorus of monks singing a classical song that his mother love (or something like that). He then explained that it did nothing at all for him so he switched to Come With Me by Puff Daddy from the film Godzilla and apologised for his lack of class.

No apology necessary Mr Pugh, the song features one of the world’s greatest ever guitarists playing the fantastic riff from Led Zeppelin’s 1974 track Kashmir.

6. Diving Into Cold Water Won’t Give You A Heart Attack

In preparation for his swim, Lewis travelled to Finland to witness the Cold Water Swimming Championships where all the hardened contestants would first dip their toe then very slowly lower themselves into the water before easing into a gentle breast stroke. When he asked why they went through such a slow and obviously painful process, he got the reply: “Lewis, this water is so cold that if you dived straight in you would die of a heart attack”.

Unsatisfied with this explanation he tested the theory with progressively colder water until he was confident he could dive straight into sub-zero water. And he did.

As with the hot showers, this challenging of an accepted practice was one of the favourite things I took away from the talk.

7. Nothing About Climate Change

Lewis conducts his feats to promote climate change awareness and to fight for causes that are related to it. Indeed, if you’ve seen his blog recently then you’ll know it’s pretty much all he talks about.

The link between swimming at the North Pole and climate change is pretty obvious (certainly more so than the link between this jet-powered school bus and teenage drug use) but it wasn’t clear what the specific purpose of his project was. I’m sure most people in the room, like me, were there to hear about his adventures rather than get a geography lesson but it seemed a shame that he didn’t at least deliver a basic message or make any simple recommendations given that he had a captive audience to further his cause.