Home Next Challenge Grant Walking the Great Wall in Winter

Walking the Great Wall in Winter

Hi Tim, Happy New Year! I just got back from Australia last night, and I plan to head off tomorrow morning for my trek…”

I’ve just taken a closer look at the weather forecast and it’s meant to snow and hit -20C overnight at the nearest weather station (meaning it’ll be closer to -25C where I will be at that time). I am going to contemplate putting this off a little bit…”

He’s out there right now so think warm thoughts for him. 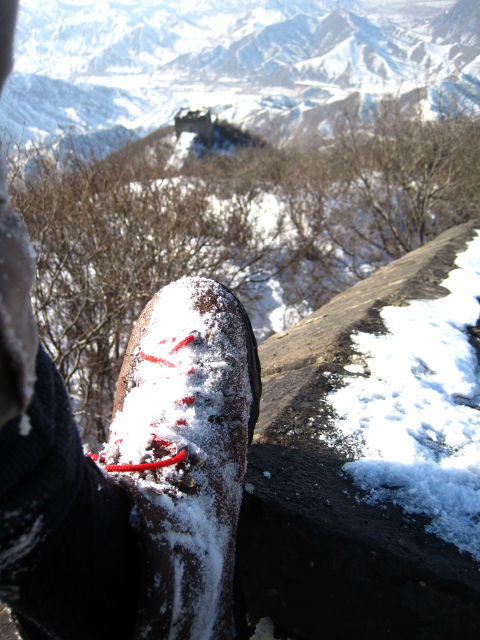 Walking the Wall in Winter

Right? Well, not quite.

Yes, the Great Wall is great. It’s awesome. I love it so much I go every clear-air weekend. But you can’t see it from space – China’s first astronaut Yang Liwei had a pretty good incentive to see it, but he sadly announced he couldn’t, just as other astronauts haven’t either.

Thousands of years old? In places, true, it dates two millennia back to the Qin dynasty. But the wall you’ve probably seen in pictures is a more modest five centuries old, dating roughly to the late 1500s, towards the end of the Ming Dynasty. Other parts date to different dynasties again.

And thousands of miles long? Well, put it like this. You might as well refer to the “Great Highway of Europe” as to the Great Wall of China. Because just as many different European kingdoms and governments built roads all over the place at different times in history, so it is with defensive walls in China. Like roads, walls of different eras had a similar purpose. But a wall built by the Northern Qi dynasty in 550 has about as much in common with the wall built by the Ming in 1567 as a Roman road in “Germania” had with the M25 in London. Similar concepts, similar purposes, but that’s really about it.

So, now that’s out of the way, how about hiking it in winter? I’ve been busy planning the route I will take on my four day effort to solo traverse a long section of wall. At first, I planned to follow the main line of unrestored (or “wild”) Ming Dynasty wall between a tiny village called Shuitoucun and the famous tourist area at Badaling. But on closer reflection, I’ve decided to deviate from that line in a few places, partly because some short sections have suffered rebuilding in recent years, but mainly so I can include a few more obscure sites I’ve been meaning to visit. There are several cool mud-wall forts, for example, and a few lines of much older stone embankment walls built 1,500 years ago. This area is not unlike places in Europe where more modern highways cross over the routes of Roman roads. As a wall-nut friend of mine likes to say when describing different dynasties’ wall design and routing, “similar problems lead to similar solutions”.

My biggest problems are cold and water. Imagine my horror a few weeks back in mid-November when temperatures suddenly plummeted and snow dumped down. It was unseasonal anyway – it rarely snows heavily in Beijing – but it was particularly unseasonal for late Autumn. Each windswept night I lay awake wondering how on Earth I would survive bivvying below -20C. Well, it’s warmed up a bit and I think the average overnight temperatures I will face will be closer to -15C. I’ve done that before, and it’s hardly comfortable, but I think I can manage.

Water is a bigger challenge. Yes, there’s a lot of snow this winter, but as you probably know, Beijing suffers heavy air pollution. I don’t want to rely on melting snow that’s sat under a layer of fine particles of heavy metal and top grade Australian coal. There are no streams anywhere near my route, and I know from experience that I can’t carry four days worth of water along with all my other supplies. So I will pre-position two caches of water at key points along my route. They’ll freeze, of course, so I will need to melt them with my stove, but that’s a lot better than trying to carry it all. I’m going home to Australia for Christmas and will retrieve my Whisperlite stove, which has a lot more grunt than the little PocketRocket gas canister rig I had planned to take.

Navigation is not such a worry for me. Partly because I’m quite good at it, and partly because after three years I know these mountains very well, but mainly because the Great Wall is a great landmark. Get on it, and follow it. My new route calls for some off-piste sections, through some rugged mountains, so I will have my GPS as a backup with waypoints programmed. But generally these can be handled easily enough with compass and a bit of dead reckoning.

Pollution management is an element you probably don’t normally think about when planning hikes elsewhere in the world. For a day walk it’s no big deal – look out the window and if you can’t see down your own street, postpone your trip. But if the smog rolls in halfway through my expedition, I’ll have to “suck it up”, quite literally. I’ll take my ‘Totobobo’ respiratory mask and some spare filters, but cross your fingers for me that I get clear skies. Sleeping inside a bivvy bag with that on my face will be, well, let’s say “a novel experience”. 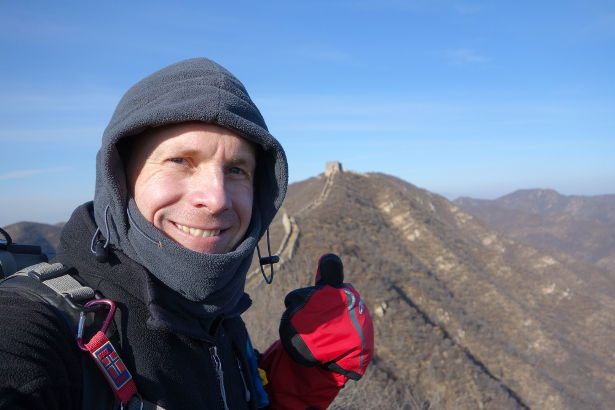 I’m looking forward to this challenge. Four days alone in the mountains, in the depths of winter, with no-one but myself to get me through. I will be cold, but I don’t think I will feel lonely. I’ve wanted to do this particular route in one go since my friends on the Great Wall Forum discussed how to do it four years ago. We couldn’t find any evidence that anyone had done it that way (people, including me, have hiked the individual sections, and a few of them are quite popular with hikers). I tried to do it all at once in 2012 and failed mainly due to the water issue (memo for this time, you can’t ration water below a litre a day!). This time around, thanks to experience and to the generosity and support of Tim Moss and the Next Challenge, I think I have what it takes to pull it off.

I’ll certainly give it a good crack. Let’s hope I don’t have to put my wife on the spot either – it’s a running joke between us that frostbitten toes are grounds for divorce (easy for her to say, sunning herself and our daughter in Australia while I do my expedition).

So, my plan in a nutshell: Think warm thoughts. Don’t get lost. Have a great time.

You can find out more about The Next Challenge Expedition Grant here and hear stories from other grant winners here.