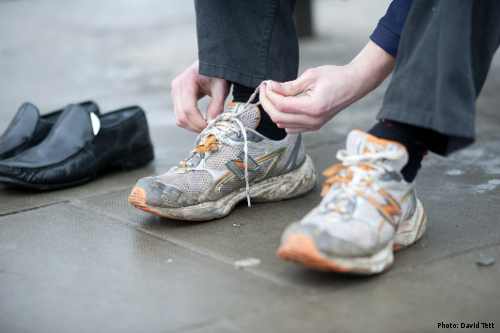 I’ve been getting back into running recently so thought I’d share some books on the subject. My outdoor swimming and cycle touring reading lists are much more comprehensive so recommendations on good running books are most welcome.

A book about a Japanese novelist training for an ultramarathon might not sound instantly appealing but this is a real classic in the world of running literature.

2. Feet in the Clouds by Richard Askwith

The definitive book on fell running, the story of its history and characters interwoven into the Richard Askwith’s account of preparing for the iconic Bob Graham Round: a 24-hour challenge to run over 42 Lake District peaks.

The Trans-American Footrace was a 3,000 mile run across the United States organised in 1928. I’d never heard of it when I stumbled across a book in the library of a container ship in the middle of the Atlantic and was hooked.

4. Just a Little Run Around the World by Rosie Swale Pope

At the age of 57, shortly after her husband died of cancer, Rosie set off for a little run which would ultimately take her 20,000 miles across the globe over a period of 5 years.

5. Confessions of an All-Night Runner by Dean Karnazes

This guy – known as “Ultramarathon Man” – has done a lot of running: 50 marathons in 50 days; a 200 mile relay race solo, ten times over; and 350 miles in one go. This is one’s the bestseller but he’s written a couple of others.

The story of Roger Bannister’s rise to completing the first four-minute-mile is wonderfully humble and very British, and the simplicity of his training seems a world away from that of the modern athlete. (I bought my copy second hand from Amazon and it turned out to be signed by Bannister himself).

7. The Loneliness of the Long Distance Runner by Alan Sillitoe

This 1960s fictional account of a working class youth getting into scrapes and finding his salvation in running has been made into a film and adapted for the theatre.

What have I missed?