Home Tim’s Adventure Portfolio Around the World in 80 Ways

Around the World in 80 Ways 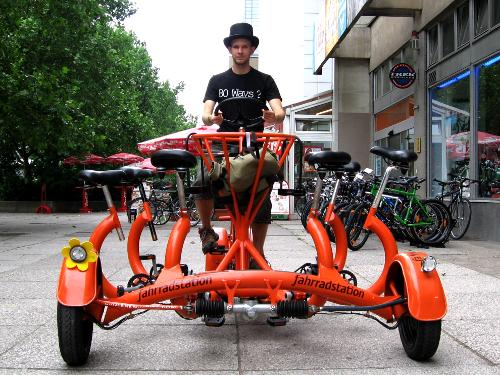 A circumnavigation of the globe using as many different methods of transport as possible.

In the summer of 2005, my friend Thom and I completed a journey around the world using eighty modes of transport.

The result of a brain storming session in a remote wooden hut in Bolivia, high on expedition-related endorphines and low on blood sugar, this was my third and final consecutive “summer holiday” at university.

Thom and I set ourselves the goal of getting all the way around the world without using the same method of transport more than once. That didn’t include buses around town and that sort of thing. We did stretch the rules a bit though by including an electric train, a steam train and diesel train…

Nonetheless, in time for the very definite deadline of my brother’s wedding, the two of us stormed our away across the globe at speed, racked up our “80 ways” and had some wonderfully odd encounters en route.

We raised a few thousand pounds for the TreeHouse School on our way and, as a result, I was given a Year of the Volunteer Innovation Award.

Here’s the trailer for an hour-long documentary that we made:

Diaries from the Road

During the trip I was sponsored by the travel website Igo Ugo to maintain a diary. Several of the pieces were voted for ‘Best of Igo Ugo’ awards. Here are some of the entries:

View the rest of the diary entries

This project also features in the following posts:

A wonderful slideshow put together by Offbeat London. The facts are a little fuzzy but that shouldn’t get in the way of a good story.

[Video above not displaying? Watch here instead]

You can also read my Off-Beat interview here.

Below original is the report I wrote after the trip. 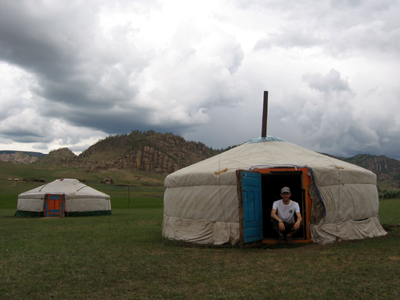 In the summer of 2005, two University College London (UCL) students, Tim Moss and Thom Allen, attempted to circumnavigate the globe using eighty different methods of transport. They gave themselves seven weeks to do it in and were restricted to using each mode of transport only once. They were funded primarily by a UCL Expedition and Travel Committee grant of £3000 and were raising money for the TreeHouse, an educational charity for children with autism.

Since we were aiming to attract attention for the trip, we decided to raise some money for charity while we were going. Tim was working as a tutor for a boy with autism and through his family we were put in contact with TreeHouse – a specialist school for children with autism that’s based in North London.

From the offset to our departure and even during the trip, we were relentlessly pursuing help from various different sources. We wanted free rides and free gear. We received rejection after rejection but we eventually made some progress. We didn’t get Richard Branson to pay for everything but we did get a lot of help on our way – see the full list in the ‘Supporters’ section below.

Are there eighty different methods of transport?

One of the first things we did was to confirm that there were in fact eighty different methods of transport but we didn’t stop there. We encouraged people to look at the list on our website and contribute ideas. At the last check we had about 300!

T-Shirts, Badges and a Top Hat

It was always our plan to wear home-made 80 Ways t-shirts around the world but when people kept asking if they could get one, we went public and sold our t-shirts for charity. We also ran off a batch of 80 Ways badges to give to everyone that helped us out on the way. Robin Dunseath, who led a far more impressive team than ours around the world in a similar ilk, also challenged us to wear a Phileas Fogg style top hat wherever we went (as if we didn’t stand out enough already).

Our route was only half planned when we left London. We had a train booked from Moscow to Beijing and a flight from Hong Kong to San Francisco. Other than that, we had a map of the world and a compass.

We ended up hitch-hiking from UCL Quad in London to Southampton where we took a catamaran to the Isle of Wight (to stay with Thom’s dad). A hovercraft took us to Portsmouth and a ferry took us across the Channel where we hitched in a van and a lorry to Paris. An electric train took us up to Berlin and a bus took us to Moscow. The Trans-Siberian took us to Beijing, via Ulan-Bator. With boats unavailable, we took a first-class train to Shanghai, a domestic flight to Guangzhou and a hydrofoil to Hong Kong. Our international flight took us to San Francisco (via Manila) and then we drove to Montreal. A freight ship sailed us to Antwerp and the EuroStar brought us home.

My account of the journey is in the full report below. You can also read the sponsored diaries I wrote for IgoUgo as we travelled.

You can read the whole report by clicking the display above or you can download the PDF.