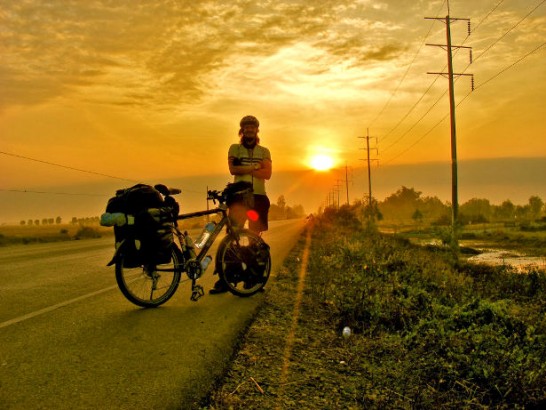 These days, Leon McCarron is a fully fledged, full time adventurer with a National Geographic TV series to his name and several big expeditions under his belt. However, in his new book – The Road Headed West – we meet a wonderfully inexperienced young Irishman setting out from New York on a woefully overloaded bicycle and trailer in search of adventure.

And adventure he finds. The book opens with Leon cycling furiously away from an angry armed Iowan and towards an angry tornado in full swing. Entertaining though the description was, I felt certain the tale was a little exaggerated to hook the reader and would subsequently turn out to be a misunderstanding or, worse, a dream. But no, after reading the rest of it, I can confirm that Leon was in fact being chased down by a man with a gun during a tornado.

The rest of the book may not be quite as melodramatic but it is no less entertaining. It seems terribly pithy to describe a book as “laugh out loud funny” but the truth is that McCarron’s book is funny and it made me laugh out loud. From the insightful questions levied at him by locals in an Irish Pub – “Do people in Ireland have normal jobs, like American jobs?” – to his candid descriptions of life on the road:

I had taken to hanging around outside grocery stores when I felt there might be a decent crowd, hoping that my bedraggled appearance might induce older and more susceptible shoppers to engage in conversation and ultimately buy me some snacks.”

I found myself smiling and laughing with regularity. 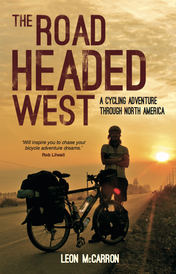 More importantly, however, this felt like a book with some soul. It is clear that McCarron’s journey meant more to him than a brief holiday or fast-and-furious charity challenge. This is corroborated, of course, by the fact that he has subsequently made adventure into a career but it is evident, too, in the book itself.

Though he is scrupulously light-hearted throughout, his ruminations through the book and the gradual evolution of his trip illuminate a deeper sense of purpose for McCarron and it is this which makes the book so compelling. The McCarron of this journey is a human one, easy to relate to and impossible not to get behind. You want him to win and you want to find out how he does it.

In short, this is a book into which the author has put as much heart as he so clearly did his cycling trip. Very entertaining and highly recommended.

P.S. If you like this book then you might also enjoy the excellent ‘Into the Empty Quarter‘ documentary, also by Leon McCarron.

P.P.S. You can also see the raw numbers and facts of Leon’s journey on the Database of Long Distance Cycle Journeys.