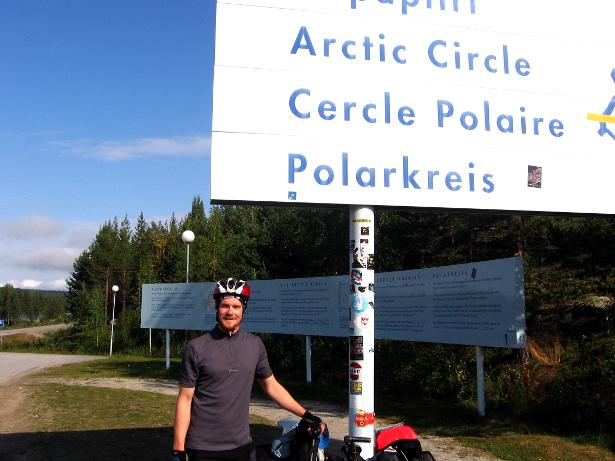 As a kid, I was always scared of cycling. I knew how to ride a bike but I could never pluck up the courage to cycle the two or three miles to my school.

But I moved to London to study at UCL and soon found myself the proud owner of a £5 Ebay road bike. It was only a few months before someone discovered that my padlock was just for show and kindly took the bike off my hands but by then it was too late: I was a fully converted London cyclist.

Cycle commuting’s fine. Fun in fact. But I wanted to try something a bit more adventurous on my bike so I came up with the idea of cycling between the highest mountains in Scotland, England and Wales, walking up each when I got there. I didn’t know if I was fit enough (I’d never cycled for more than a day before) or if my bike was up to it (it only cost £150 from Decathlon) but I booked some train tickets and ended up having a great time.

The following year I joined some friends on a long weekend’s ride to Amsterdam and back. By now, I was a fully converted touring cyclist.

For my next trip, I set my sights higher. I knew that my work would be taking me to the top of Norway the following summer and I hatched a plan: rather than fly home, I would cycle.

I took my old faithful Decathlon beast out with me, borrowed a small tent from a friend, packed a stove into my panniers and set off southwards from the top of Europe.

It was quite a culture shock. I was deep into the Arctic circle at the beginning and, being summer, that meant near 24-hour daylight and mild temperatures most of the time. Navigation was easy too as there was only one road for the first 150 miles or so.  I didn’t speak to anyone at all for three days after I set off – not a word – and even after that my first conversation was a brief one: Do you speak English? “Yes”. Do you have any maps? “No”. OK, thanks!

It wasn’t all plain sailing though. My stove stopped working after the first week and someone stole my shoes when I spent a night in a hostel so I had to cycle the remaining distance in sandals eating cold sandwiches for tea. The mosquitoes up north were relentless too.

But when arrived back into London Stansted after a short budget flight from Stockholm (I only had three weeks off work so couldn’t make it all the way on two wheels), I felt like a new man. I unpacked my bike from its cardboard box, reassembled it outside Arrivals and pointed my front wheel homewards.

Since then I’ve been on a few more tours – through France, across Wales and around Oman – and even written a beginner’s guide to cycling around the world.

If you are a cyclist or just someone who knows how to ride a bike then you already meet all the criteria for completing a tour. Any bike will do. As mentioned, I used the cheapest touring bike I could find but I’ve also done long days (60 or 70 miles) on a single speed and I’m no hero. My wife’s bike, which she rides with me on most trips, cost about £300 on the cycle to work scheme. If your bike can take a rack then you can carry more kit which makes camping easier. If not then just load up a rucksack and perhaps book a hostel.

If you ride to work once in a while then your legs will be strong enough to pedal a bit further on a special occasion. And getting up the next day to do the same will probably be fine too. You might be surprised how quickly your body adapts.

As a start, find a train station somewhere between, say, 30 and 60 miles from your house and try cycling there on a weekend and taking the train back. If you like it then pick a hostel or campsite for another weekend to cycle there and back. If you can do that then you are already a tourer. Happy adventures.

(This article was originally written for London Cyclist)