Why I Quit Being an Adventurer to Become an Accountant 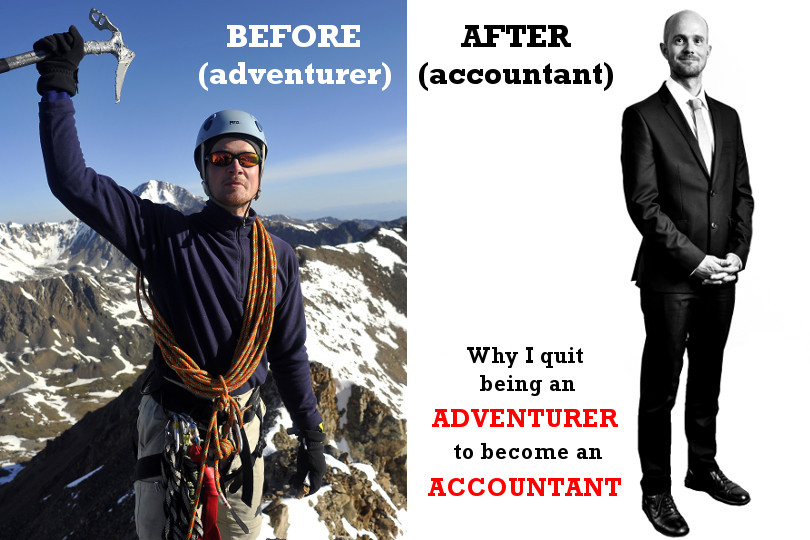 Last month, I qualified as a Chartered Accountant.

After three years and 15 exams, I am now chartered in my chosen profession. You will note that my profession is not “adventurer”.

I don’t actively portray myself as a full-time adventurer. A cursory glance at my LinkedIn profile would reveal that I have “a normal job” and I am constantly writing about how to fit expeditions into annual leave (like here, here, here and here).

But since I only write about adventure stuff (because this is an adventure blog), you could be forgiven for thinking that adventure was my vocation.

It used to be, but adventure stopped being my vocation some time ago. Here’s why…

Working as a full-time adventurer

For several years, I tried to work full-time as “an adventurer”. That meant running this blog, writing articles, giving talks and organising other people’s expeditions.

However, I gave that up a few years ago for the following three reasons:

1. Making money as an adventurer

I never made much money from adventure stuff. No one paid me to go on expeditions, so I used to make a living through part-time jobs like working in a shop, designing websites and tutoring maths. I also earned a tiny amount through my website and books (details here) but nothing that I could have lived off.

It was not that I could not make money from adventure stuff, it was more that I didn’t like doing the things that made money:

I also considered making money to be dirty and could never mentally justify charging people for things that did not cost me anything, like advice or research. I realise that is a ridiculous position, but that is how I felt at the time.

All jobs involve elements that are less enjoyable, but since I was self-employed, and no one was telling me where to focus, I never put enough time or effort into chasing things that would pay.

The inevitable result was that I never made much money.

Even if I did not need to make money from it, I still would have stopped being a full-time adventurer for the next two reasons.

Not making much money was not good for my self-esteem.

I am not particularly driven by money and have never earned a large salary (becoming chartered is the first time I’ve earned above the national average) but earning only a few thousand pounds a year affected me in ways I did not expect.

Little things like having to avoid social occasions because I didn’t have the money to buy a drink, and only being able to do activities with my wife if she paid, made me feel pathetic.

Working from home was also bad for other parts of my mental health.

I am an introvert. I don’t like large groups and lots of social interaction. I am also disciplined and motivated. As such, working from home was great for me in many ways. I could keep myself to myself and work long hours on what I enjoyed (like writing my first book).

However, sitting at home all day, on my own, with no interactions was too much. I didn’t realise it at the time, but it ate away at my confidence and drove me to depression and anxiety (which I’ve written about elsewhere).

3. Fulfilment as an adventurer

The final reason I stopped doing adventure stuff full-time is that I did not find it fulfilling.

I know it is supposed to work the other way around: you get fed up with the nine-til-five and quit to go on an adventure. But, for me, just doing adventure stuff did not feel like enough.

I think that helping other people have adventures (which is the aim of my website) is a worthy cause. But I used to spend most of my time trying to promote myself on social media and convince people to publish my articles / sponsor my expeditions / book me as a speaker. None of those things felt worthwhile.

When I did go on adventures (which was not that often given my lack of funds), they felt like an indulgence.

It also felt like I was rarely using my brain.

All of which – the money, the depression and the lack of fulfilment – made me decide to stop doing adventure stuff full-time and, instead, get a normal job. 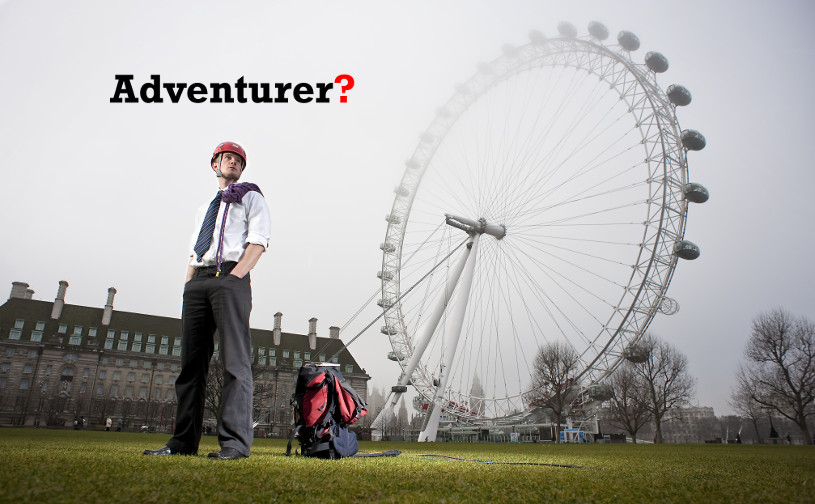 Even when I worked full-time as an adventurer, I tried to show how you can fit adventures around a day job. Like in my Everyday Adventures campaign.

OK, but why an accountant?

I get a mix of reactions when I tell people that I switched from being “an adventurer” to being an accountant. The word is almost a synonym for “boring”, which would put it at the opposite end of some kind of spectrum from “adventurous”. As such, people tend to respond with a mix of bewilderment and horror.

(For the record, I am not an accountant in the traditional sense. I don’t do tax returns or look after anyone’s books. I work in insolvency and help struggling businesses. But that’s by the by).

It may seem like an odd jump, but there were clues even in my online adventure persona, like my excessive use of spreadsheets (e.g. here, here, here, here and here).

Those that know me in real life will also know that I was a massive maths nerd at school, used to be a maths teacher, love sitting at a computer and am still a massive nerd.

As such, accountancy is a natural fit. But if I’m working in an office full-time, where does that leave The Next Challenge? 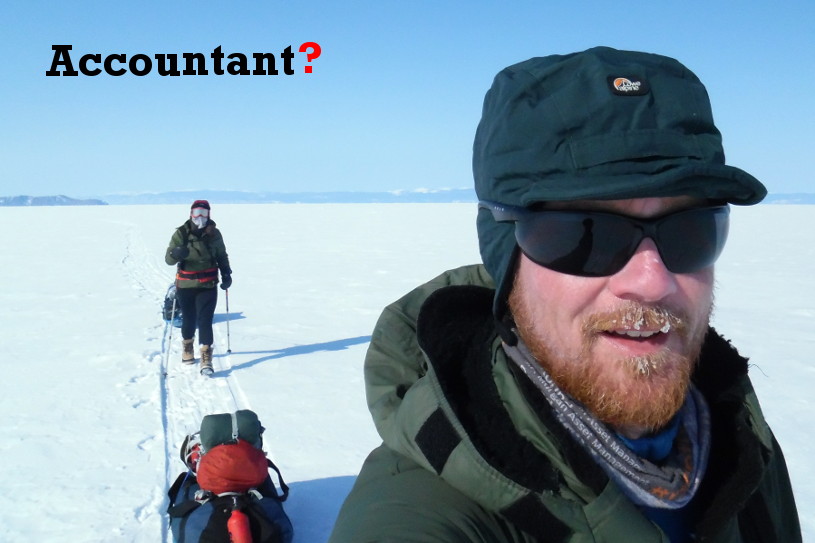 While training as an accountant, I used annual leave to cross a frozen lake in Siberia. (The other person in the photo is my wife, Laura, a solicitor/adventurer).

What next for The Next Challenge?

It is six years since I worked on adventure stuff full-time. I stopped in 2012. Ever since then, my website and other activities have just been side projects.

Given that I only started the website in 2009, that means I have been running it as a hobby for twice as long as it was my vocation. In that time, I have:

In other words, the fact that I am now a Chartered Accountant is of no relevance to the activities of this website. It will be business as usual.

Indeed, not having to earn money through adventure has been a huge relief. I can now focus on the things I enjoy – like funding aspiring adventurers and making spreadsheets – without having to worry that they don’t make me any money. For better or worse, it also means that any trips that I go on feel earned rather than indulgent.

And, ironically, since I stopped relying on adventure stuff to make a living, I have made more money from my website than I ever did when I worked on it full-time. A blog post on this topic will follow (expect statistics and graphs).

Who cares whether you’re an adventurer or an accountant?

The summary of the above is that while I may have given a different impression, I actually quit trying to be an adventurer many years ago. Adventure has only been a hobby for me since 2012.

The reason I thought I would share this is the same reason that I (reluctantly) share anything about my personal life: to help get rid of the perception that expeditions are only available to an elite cadre with corporate sponsors and no worldly commitments. I am lucky enough to go on some really cool expeditions, but I am also an accountant and spend most of time staring at Excel.

Having an “ordinary job” does not mean you can’t also go on extraordinary adventures. 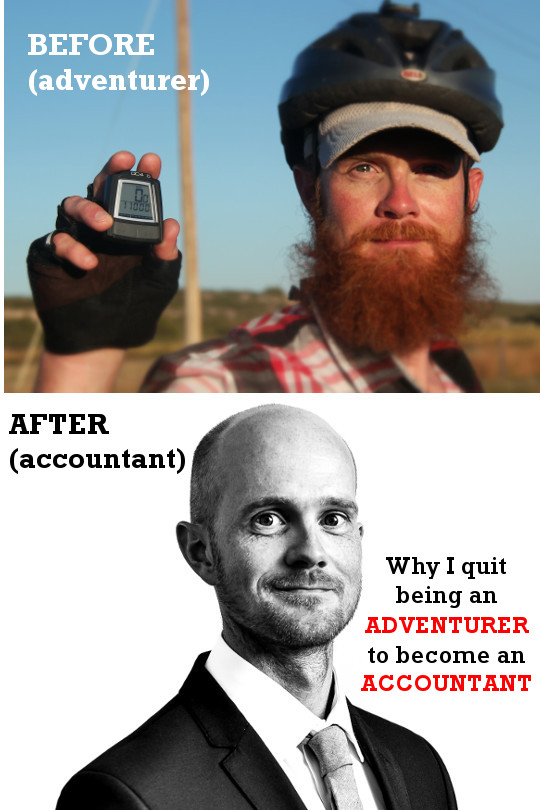 P.S. The other reason I am sharing this is because every time I go to the Explore Conference and try to impress someone with my wisdom or tales of heroics, Leon McCarron pops up and shouts: “Did you know that Tim’s actually an accountant?”. Hopefully, this will now stop.