The Soto Muka is a new multi-fuel stove that does not require priming before lighting. As such, it is quicker, easier and cleaner to use than any other liquid fuel camping stove. 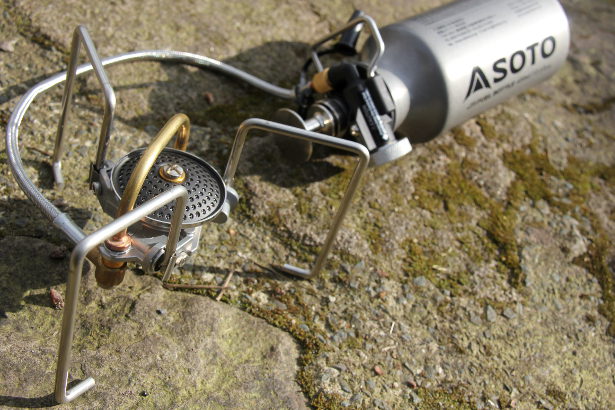 The Soto Muka OD-1NP is a wonderfully innovative stove that is far easier to operate and maintain than other liquid fuel stoves on the market. It primes automatically, has no fiddly jets to change or clean and has some other neat features like a pressure gauge indicator and an ‘O2 Maximizer’ to ensure efficient burning even with the windshield attached.

Quicker, easier and cleaner to use than any other multi-fuel stove.

Can’t use other companies’ fuel bottles.

You should buy this stove if…

You want/need to use liquid fuel but want to avoid the faff of priming and cleaning a multi-fuel stove.

You shouldn’t buy this stove if…

Priming a multi-fuel stove and cleaning the jets doesn’t bother you.

Multi-fuel camping stoves are portable cookers that can burn a variety of liquid fuels such as petrol, diesel, kerosene and white fuel. This versatility makes them excellent for travelling because you can always find petrol/gasoline. However, they’re much fiddlier to operate than camping stoves that use gas canisters.

The main reason they’re harder to use is that the stoves need to be hot before they can efficiently burn liquid fuel – something of a paradoxical position for a stove. This is dealt with by manually leaking a small amount of liquid fuel into the bottom of the stove and lighting it, generating a sooty, loose flame. You then have to wait until just before the flame goes out to open the fuel valve. Do it too early and you get a plume of yellow flame, too late and you have to start over again.  This process is known as “priming” and, if Soto have their way, it will be a thing of the past.

The Muka does not need priming like that. Indeed, it has no well or felt pad in its base for such a process to take place even if you wanted it to. Instead, it looks more like a gas stove. Through a rather ingenius design, the technicians at Soto have built a stove which automatically primes itself. This makes the process far easier and less messy. It is a genuinely clever innovation that will reduce the faff and stress of many campers. 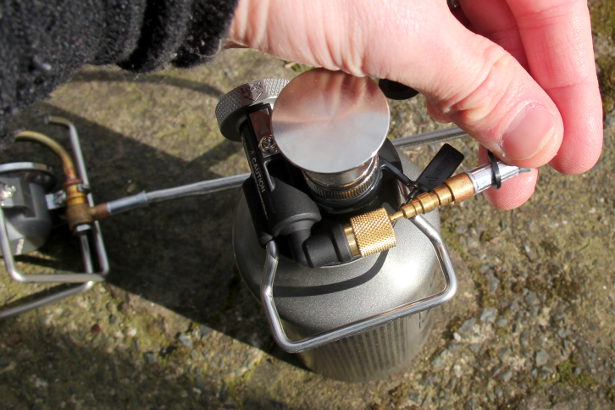 The Soto Muka’s fuel pipe attaches through a small brass valve rather than the usual screw attachment.

(Disclosure: I emailed Soto whilst researching my Comparison of Multifuel Stoves article and asked for a Muka stove to review).

The first thing you’ll notice about the Muka as compared to other multi-fuel stoves is that it’s very small. It doesn’t have the big well underneath the burner where most multifuels pool their liquid fuel and thus looks much more like a traditional gas canister stove.

It uses thin wire-like folding legs too in contrast to the bigger more elaborate ones found on, say, the Optimus Polaris or Primus Omnifuel. This no doubt contributes to its tiny weight (see below).

Included in the box

Much wider neck than regular multi-fuel bottles to allow the elaborate Muka fuel pump to fit inside. This is only signifcant because it means you won’t be able to use, say, a Primus or MSR fuel bottle as a spare or vice-versa.

This is where the action is. The valve that would normally just open and close (on and off) has several different settings: Start, Stop, Run and Air. All that’s required for priming is to turn the valve to Start, light it, count to 10 then turn it to Run. When you’re finished, you move it to Stop to turn it off then Air to let the air out. Simple.

There is one other great little innovation on the Muka’s pump. It has an indicator to tell you when the fuel bottle has sufficient pressure. As you pump, a tiny brass bar extends from the side of the pump and, when you see red, you know it has enough pressure. Similarly, if this disappears during cooking, you know you need to pump more. 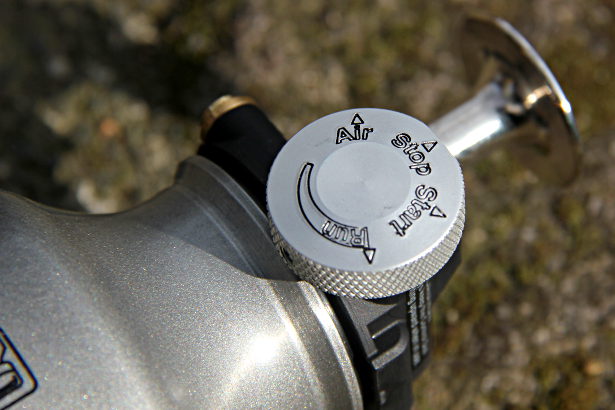 The Magic: turning this valve is all that’s required to prime the Muka.

A final neat idea from the Soto guys is their ‘O2 Maximizer’. Most multi fuel stoves come with round aluminium wind shields. They’re great for wind protection but they can reduce the amount of air flow to a stove and thus make it burn less efficiently. The Muka stove has an air valve built into one side. The O2 Maximizer is a thin tube of aluminium which screws into the air valve and pokes out through a hole in the side of the windshield guaranteeing good air flow.

The video below from Soto gives the best demonstration of how the Muka works:

Here’s a summary of the priming process:

So, you do still have to prime the stove it’s just that all it involves is turning a dial. It’s much quicker, easier and cleaner than doing so with other stoves. I got the hang of it on my second attempt and can confirm that it really is as easy as it looks.

One other advantage of the clever fuel valve is that it can be set to just pump out air. As such, when you’re finished, you can depressurise the fuel bottle much more effectively than with other stoves meaning that when you unscrew the pump, you don’t get that small hiss of liquid fuel leaking out and getting on your hands.

(If you’re interested in how the stove works, there’s a great video here).

The Muka burns clean white fuels as well as unleaded petrol gasoline. It cannot operate on diesel or kerosene and does not take butane/propane canisters. (For an explanation of the different types of fuel, see here).

Ease of use – nozzles, simmering and priming

The Soto Muka is wonderfully easy to use. It has no nozzle/jet so there’s no need to change one when switching fuel types. As explained above, the priming is carried out with a simple turn of a dial so much easier than any other liquid fuel stove.

It does not, however, have a specific simmer function. You can control the heat output of all stoves by adjusting the fuel valve but some have a separate valve on the base of the unit which can be used to fine tune the heat. 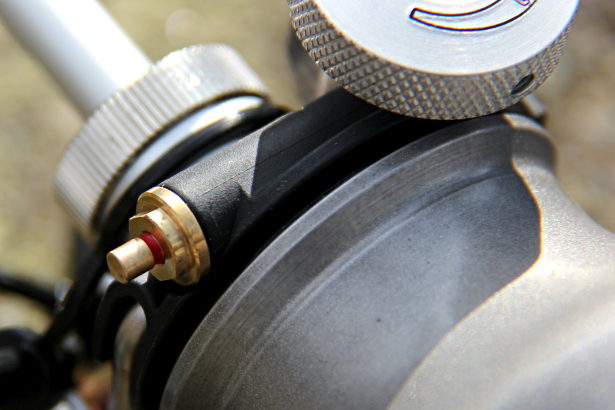 The visible red band on this tiny brass pin indicates that the fuel bottle is sufficiently pressurised.

Despite all its fancy features, the Soto Muka is one of the lightest multi fuel stoves on the market. It ranks third out of 28.

On cost, the Soto Muka is about mid-range. The popular MSR Whipserlite and Dragonfly stoves are cheaper whilst the XGK costs more, as do the Primus stoves and new Polaris Optifuel.

The Soto Muka is an excellent stove with several innovative and genuinely useful features. The pressure gauge on the fuel pump and the O2 Maximizer on the windshield are nice touches that other manufacturers should consider. The automatic priming feature, however, is in a league of its own and no other stove manufacturer has anything close to it.

The only other innovation in the liquid fuel stove world of any comparison is the Polaris Optifuel‘s ability to burn all fuel types (unleaded petrol/gasoline, white fuel, diesel, kerosene and butane/propane canisters) through a single jet. If Soto make a stove that can also burn gas canisters – or produce an adaptor so the Muka can – then they will have a truly world conquering multifuel stove.

In summary, if you have never used a multi-fuel stove before or are tired of having to prime and clean the one you own then I wold seriously consider getting a Muka.

(To find out more about the other 27 multi-fuel stoves on the market, see my Comparison of Multi-Fuel Stoves).

The most reliable place to find a Soto Muka OD-1NP in the UK and America at the moment is probably Amazon. If you’re thinking of buying one online then please do use the links below as a small percentage will go to supporting this website.