Crossing the Alps by Bicycle (Video) 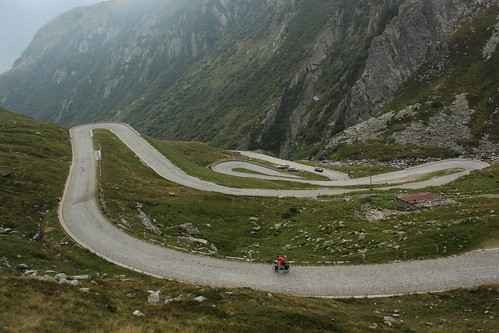 The Alps felt like our first proper test. We knew we could cycle 50 miles a day several days in a row with a heavy bike but neither of us had ever cycled over a 2,000-metre pass before now.

It wasn’t as hard as we thought it might be and not nearly as hard as we feared it might. Harder were the shorter, steeper slopes we encountered two days before which, on fully laden bikes, were only ascendable with the aid of standing on pedals and/or lactic acid. For the most part however the Gotthard Pass allowed for slow and steady progress in the lowest gear. The worst part was the traffic on the switch back tunnels near the top.

Anyway, enough words. Here’s the movie. It was shot entirely on our little GoPro video camera and made into a film automatically using a programme called Magisto.

We filmed this video whilst cycling around the world. You can read more about the trip here or click below to watch the rest of the movies:

8: Cycling Down Under: Australia & New Zealand