Brooks England are best known for their iconic (and excellent) leather saddles. However, they do in fact have a wide range of other products. Most of their products fall into the category of beautiful but expensive. Their new pannier range – Brooks Lands End Panniers and Brooks John O’Groats Panniers – however, also happens to be really good.

Ask any given cycle tourist about panniers and they will at some point mention Ortlieb. Ortlieb panniers are the industry standard and easily the most popular. And with good reason: they are tough, light and well designed.

So your interest in the Brooks panniers should be immediately piqued by the fact that they are designed by Ortlieb. In fact, at first glance, they appear to be almost identical to Ortlieb Rollers only a bit more stylish. Look a little closer, however, and you’ll see the differences.

I have been using both the Brooks Lands End and Brooks John O’Groats panniers on an around the world cycling trip. Every day for the last eight months I have cycled with them, opened them, closed them and lugged them up stairs over 10,000km in 15 different countries. For comparison, I have previously used Ortlieb Roller, Sport, Classic and Plus panniers and my wife, Laura, is using Ortlieb Rollers on our current trip. This review is based on these experiences.

Disclosure: I was given these panniers by Brooks to test and review.

Update after seven years of testing

Six years after writing this review, I received an email asking if I was still using the panniers and whether I’d had any issues with them.

This is what I wrote in reply:

“I am indeed still using the Brooks panniers seven years later. I think one of them has a small hole in but I’ve not had any other damage/issues.
I think they’re really good, albeit very similar to the regular Ortlieb ones.
They’re a bit bigger, and look and feel much nicer. The closing mechanism (the metal hook that attaches to the fabric loops) is fiddlier than the Ortlieb’s plastic clips, and occasionally comes undone while riding. It also loses some functionality: there’s no shoulder strap option and you can’t clip it into the Ortlieb saddle pack.
I’d say they are pretty much as good as regular Ortlieb panniers. If you prefer their set up or just like the look, then go for it. If you just want functionality then I’d say save your money and get the regular Ortlieb.” 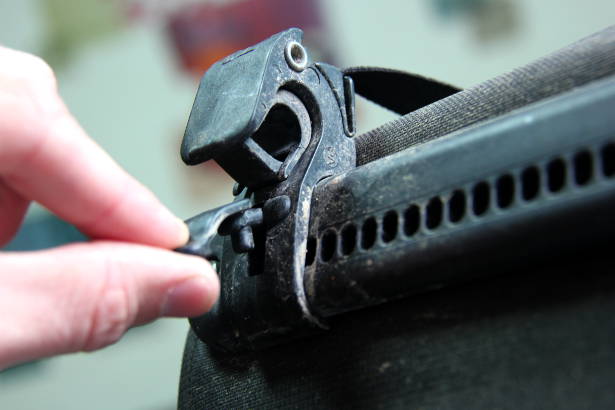 The Brooks panniers use the same rack attachments as the Ortlieb Plus range. Like all Ortlieb panniers, that means that they have the locking feature where the pannier attachs to the rack at the top and which automatically unlocks as you lift the handle. They also come with different size clips to fit racks with tubes of varying circumferences. The Plus version, in contrast to the Ortlieb Classic range, allows you to adjust the fittings without a bike tool, using a click in/out system at the top and a screw tight/loose by hand system for the lower attachment. No allen keys required. 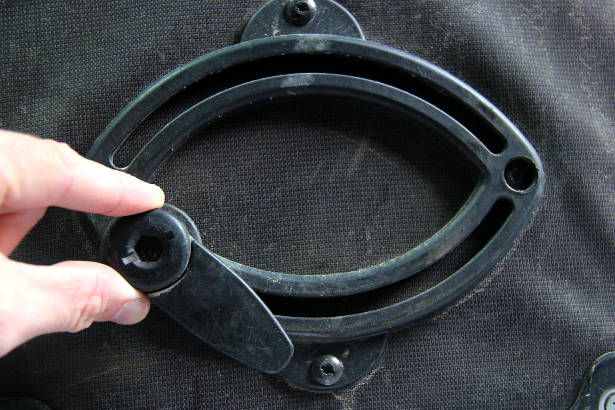 It’s immediately obvious that the material used on the Brooks Lands End/John O’Groats panniers is different from Ortlieb’s standard. It is closer to their Plus range than the Classic in that it has a matt finish and looks less plasticy. However, the Brooks panniers are much tougher than either Ortlieb material. The Lands End/John O’Groats material feels really tough against both abrasion and piercing. They are, however, still very light.

As an example of this, I crashed while flying downhill at about 30mph (50kph) in Montenegro. My bike fell onto its side, the rear left pannier took the brunt of the fall and I skidded on my pannier some distance down the concrete. It was covered in grit and dust (and my head was saved by my helmet) but, once dusted off, the pannier remained completely unscathed.

Finally, if it’s important to you, the finish on the material looks really classy.

Like any good waterproof dry bag, the Brooks panniers use a roll top system. However, instead of Ortlieb’s plastic buckles that clip in and out, the Brooks bags use a simple metal buckle that slides onto one of three fabric loops on the sides. It looks a bit antiquated at first glance but actually works well. It’s simple to use and can be done one handed (which is useful when you’re leaning over the bike in an awkward position). There is also no obvious way for the system to fail (in the way that, say, an Ortlieb plastic clip might break) and, if something did happen, it is so simple that a temporary fix would be easily managed. 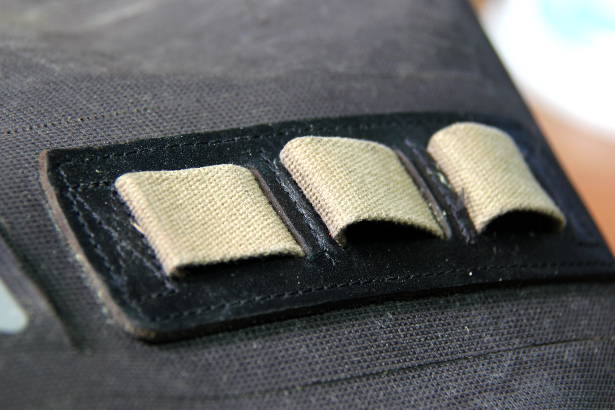 The fabric loops for fastening

The video above shows the user attaching the clip and then tightening the strap to fit, however, I’ve always found it easier the other way around: adjusting the strap length first and then stretching it down to the furthest attachment it will reach.

On the downside, the fabric occasionally gets caught when you’re trying to slide on the metal clip resulting in minor frustration as you repeatedly try to force it on. Also, if it’s not tightened properly then, unlike an Ortlieb plastic clip-in, the metal clip will simply slip out of the fabric loop and dangle loosely.

I have deliberately not mentioned the small reflective tab above the fabric loops through which you are supposed to pass the metal clip. It is the worst feature of the bags. I presume that it is meant to help keep you clipped in but it in fact has the opposite effect: it reduces the tension on the lower part of the lid and thus makes it *more* likely for the clip to come unattached. Moreover, it is really fiddly to get the clip through the tab and even more fiddly to get it back out again. I have used these panniers every day for eight months, never used the tabs and almost never have any problems with the clip coming unattached. 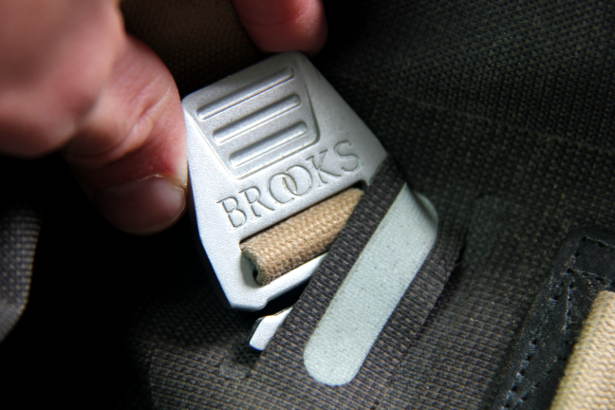 This wouldn’t be a big issue – you can, of course, just ignore the tab as I do – except that if you pass the strap over the top of the tab, you also cover the only reflective patches on the panniers. Those reflectors are one of the best features of Ortlieb panniers and would be the same on the Brooks panniers. My advice to Brooks would be to remove the tab and put the reflectors elsewhere e.g. to either side of the strap. 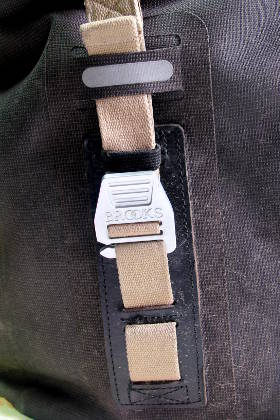 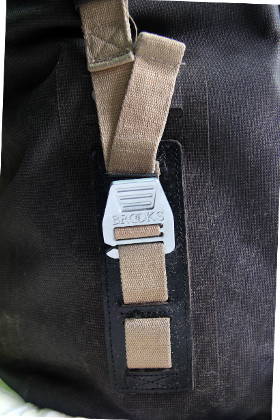 Lastly, and again only for those bothered, in contrast with the cheap looking Ortlieb plastic clips, the metal and fabric attachment system oozes cool.

Summary: decent and simple if you don’t use the reflective tab.

Both the LandsEnd and John O’Groats panniers are sleek and simple on the outside. The closure has its fabric strap and metal clip, and the sides have their fabric loops on a leather backing, but the rest of the exterior is clean with no other bells or whistles.

The Lands End and John OGroats panniers are 23- and 15-litres respectively. This is large for back and front panniers. The Ortlieb Back and Front Rollers, for example, are 20- and 12.5-litres. They are also wider than Ortlieb panniers. The John O’Groats bags in particular are much wider than the Ortlieb equivalent Front Rollers so not only are they larger but they are also slightly less restrictive when packing bulky items. They do, of course, roll down so under-filling need not be a problem.

Inside, both sets of panniers have a hard plastic backing with a series of plastic lumps sticking out to cover bolts. These lumps are a common feature in panniers. They’re a bit annoying sometimes but there’s not a lot you can do about them. Inside the larger Lands End panniers, there is a fabric sleeve covering the back with a zipped mesh pocket for documents and the like. This helps cover those plastic lumps.

(N.B. Early images of the Lands End panniers show a small zip pocket sticking out the side of the pannier, half way down. Current models do not have this).

Like most panniers, the John O’Groats and Lands End bags have handles at the top. Unlike the Ortlieb panniers, however, they don’t have the optional shoulder strap (see note below). The way panniers hang from those handles actually makes them really awkward to carry, particularly when heavy. I’ve found that the heavier bags are much easier to carry if you grasp one of the fabric straps on either side, thus lifting them on their side. 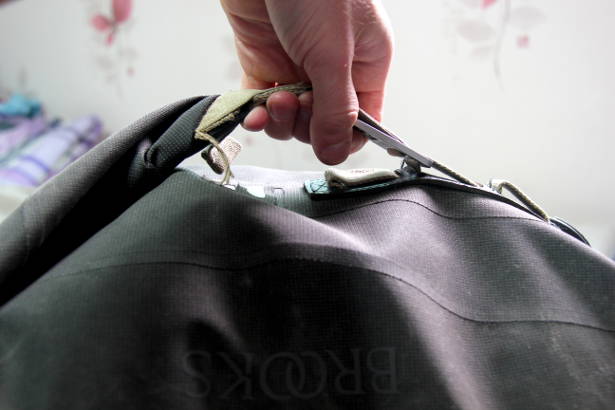 Easier to carry by the side straps than the top handle

(N.B. Some descriptions of the Lands End and John O’Groats panniers talk about a shoulder strap and being able to carry them like a messenger bag. This is an erroneous claim. Perhaps earlier models had this feature but the new ones do not and there is no obvious way that they could).

Summary: no shoulder strap option but easily carried by side straps.

The similarities and differences between Brooks and Ortlieb panniers are detailed above. In summary, I would say that the Brooks Lands End and John O’Groats panniers are at least as good as, if not better than Ortlieb Roller Classics and Plus.

The Ortlieb panniers have more functionality with their straps (i.e. different closure methods, optional shoulder strap and ability to attach to an Ortlieb Rack Pack), useful reflective patches and are, of course, notably cheaper.

The Brooks panniers are slightly larger, slightly wider (thus easier to pack), made from a much tougher material, have a simple closure mechanism and are about as beautiful as a bicycle pannier can ever be.

Summary: miss the extra functionality of Ortlieb’s clips and their reflectors but the Brooks bags are larger, tougher, simpler and cooler.

Eight months and 10,000km into our sixteen month, 20,000km cycle around the world, I am very pleased with my Brooks panniers. They are easy to use and just as solid as the day I left and I would highly recommend them.